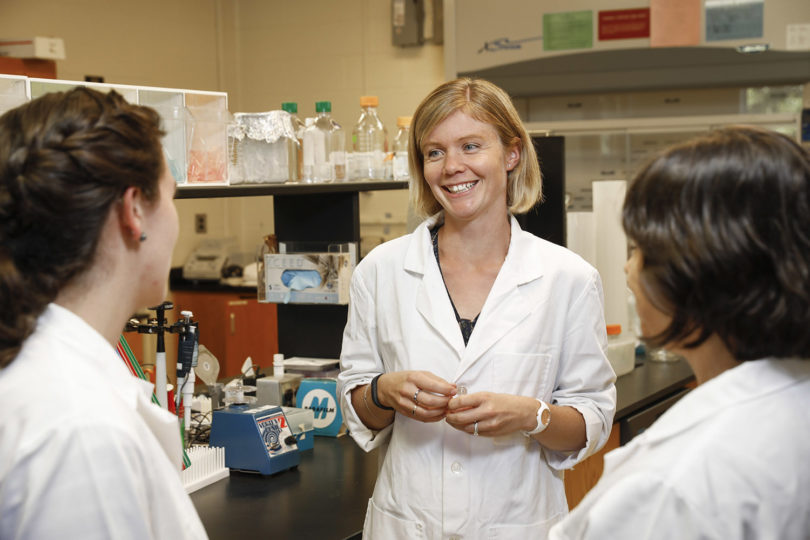 Claire de La Serre’s first lab was a dirt- and grass-filled box in her backyard in southwest France.

There, she raised snails by the dozens, testing different diets on them, weighing them periodically and recording the data.

“I was a giant nerd,” she said, laughing. “I’ve just always wanted to know how things work.”

She eventually freed the snails, but her early experiments foreshadowed a promising career in science. 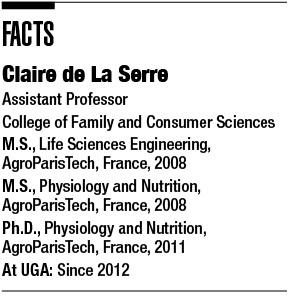 De La Serre is now an assistant professor in the University of Georgia’s College of Family and Consumer Sciences.

Based out of the college’s foods and nutrition department, de La Serre investigates ingestive behavior, specifically how the gut communicates with the brain and the mechanisms that trigger overeating.

“We have signals coming from the gut that tell you to stop eating, and we’re finding that those are not working very well anymore when you consume junk food regularly,” de La Serre said. “My research looks at how this could be triggered by inflammation in special (gut) bacteria.”

De La Serre has received funding from both the National Institutes of Health and the U.S. Department of Agriculture for her work and received the college’s Early Career Research Award last year.

In addition to her research, de La Serre manages a lab with five graduate students and teaches a basic human nutrition course, an upper level class on metabolism and a seminar course to graduate students.

“I really enjoy teaching the undergraduate/graduate course on the physiology of obesity because this is my area of research and expertise, and it is usually fairly new to our students,” she said. “I like explaining to them how the brain rewires with weight gain and weight loss and going beyond the idea of the ‘eat less and exercise’ solution for obesity.”

De La Serre’s passion for mentorship and discovery was shaped by her own graduate school experience in Paris in 2006.

A visiting speaker, Helen Raybould, gave a talk that ended up being de La Serre’s “a-ha” moment, convincing her to pursue a career in academics.

De La Serre approached Raybould after the talk and asked if she could work as an intern in Raybould’s lab at the University of California-Davis.

“My first experiments didn’t work right away, but I was getting to something and that was exciting,” de La Serre said.

Following a postdoctoral fellowship at Johns Hopkins University, de La Serre was initially hired as a lecturer in FACS in 2012.

“She is brilliant,” said Carolina Cawthon, a doctoral candidate working in de La Serre’s lab. “You can look at the body of work that she has produced in a relatively short period of time and see that. But there are plenty of brilliant people who don’t have any ability to help others join their ranks. She really can do that.”

Among the most exciting recent developments in de La Serre’s lab was the arrival on Thanksgiving day of a cohort of  “germ free” rats from Europe, which will allow for more advanced research into pathways of overeating.

“We’ll be able to do a lot more controlled experiments and pinpointing closer relationships,” de La Serre said. “We’re going to have animals with no microbiota, and we can inoculate them with specific microbes and see how their brains react to that. It’s very exciting.”

While de La Serre said she still finds the research fascinating, just as she did as a young girl in France and as a young graduate student in California, she has since discovered that working alongside students is especially gratifying.