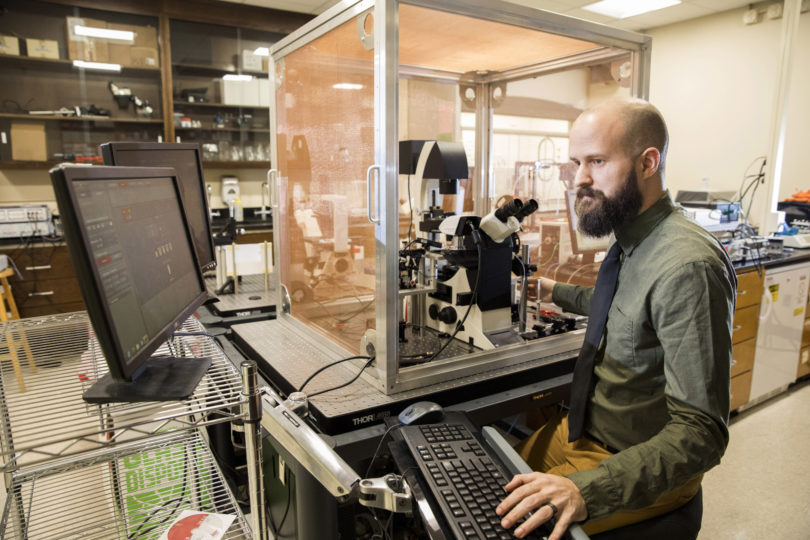 Eric Freeman’s first homework assignment in microfluidics as a graduate student was to watch A Bug’s Life. Analyzing Pixar’s 1998 computer-animated comedy might not have been an unusual assignment for a film student or a computer science student, but Freeman was beginning work on a master’s degree in mechanical engineering.

As it turns out, the assignment was more than an off-beat diversion and its lesson stuck.

“There are scenes in the movie where rain drops are falling like bombs and the ants get trapped in droplets of water and can’t escape,” said Freeman, an assistant professor in the University of Georgia College of Engineering. “Those scenes illustrate the concept of surface tension and demonstrate how fluids behave very differently when you shrink down to an insect scale.”

In his lab at UGA’s Riverbend Research Center, Freeman uses these basic concepts of fluid mechanics to create artificial cells similar in scale to organic cells. He is one of only a handful of scientists in the U.S. conducting such research. His work could help biologists and others advance our understanding of natural processes.

“We take droplets that are anywhere from 10 to 1000 microns in diameter and we dissolve lipids in them to create an oil and water mixture—a little like a glorified salad dressing,” said Freeman. “These lipids coat the droplets and we can manipulate them so they fuse into joined droplet chains with a lipid membrane between them, governing the exchange of fluid and charge between the adjacent droplets through embedded channels and pores.”

The artificial membranes approximate the membrane surrounding a living cell, allowing Freeman and a team of undergraduate and graduate researchers to study transport phenomena and how cells respond to changes in the environment.

“The advantages of this bottom-up approach to synthetic biology are you know exactly what’s in the droplets and you can modify their contents with a fine degree of precision,” Freeman said. “This approach allows you to map what’s going on at the membrane interface by interpreting the results using mathematical models.”

Freeman also hopes his research can lead to advances in biologically-inspired smart materials inspired by cellular mechanics. He and his team have worked on bio-batteries, mechanosensors and energy harvesters.

“We’re constantly exploring ways to improve their durability and their reliability,” he said. “We also want to understand how we can exploit cellular phenomena to create an actual engineering material.”

Freeman joined the College of Engineering faculty in 2014 after working as a post-doctoral researcher at Virginia Tech. He was attracted to UGA because of its interdisciplinary approach to research and its long-standing strength in the biological sciences.

“Since I’m not strictly a biologist, I found during my time in graduate school and as a post-doc that I needed complimentary expertise to work through some of the challenges I encountered in my research,” he said. “I knew UGA would be a good fit for the work I do.”

Freeman’s collaborators on campus include researchers in microbiology and chemistry.

His work in the lab has directly led to the creation of a graduate-level course Freeman teaches in microfluidic transport phenomena. He also teaches senior-level courses in biomechanics and finite element analysis.

Freeman believes serving as a mentor to his students is one of his most important roles.