Athens is home to a growing craft beer industry--led by UGA alumni--that is committed to enriching the community.

Watts BBA ’03 is the president of the Terrapin Beer Co., the first craft brewery established in Athens and now the second largest brewery in the state. Terrapin’s co-founder John Cochran BBA ’93 hired Watts after hearing that the then-UGA marketing student was talking up Terrapin at his bartending job—and selling a lot of Terrapin beer. 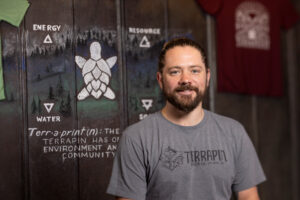 Dustin Watts BBA ’03 is the president of Terrapin and one of its longest serving employees. One of his passion projects is Terraprint, the brewery’s sustainability platform. Through Terraprint, the brewery supports a range of efforts including clean water, energy reduction, better soil, and increased recycling. (Photo by Peter Frey/UGA)

Watts was a natural for Terrapin’s sales staff, and after the brewery facility opened in 2007, he worked his way up, eventually leading the sales and marketing staff. In 2018, he was promoted to president.

Watts is still promoting Terrapin beer, but in a wider sense, he’s also promoting the importance of craft beer—to a place’s culture, its economy, and its identity.

“Craft beer’s one of these products that, when people ask about it, they have three questions: What’s the name of the brewery? What’s the style of beer? Where is it from?” Watts says.

“With a lot of products, you don’t necessarily ask where they’re from,” he continues. “But with craft beer it’s critical. Everybody asks about it. So, we definitely are proud to be from Athens, and we love showcasing Athens. And Athens as a great beer town is becoming a bigger part of the conversation.”

And that conversation is becoming much more interesting as Athens’ craft brewery ecosystem has grown over the last decade. 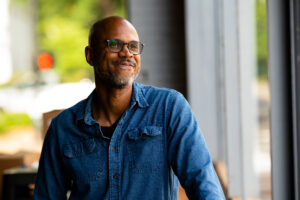 Fenwick Broyard MSW ’13, vice president of culture at Creature Comforts, is one of nearly a half dozen UGA alumni on the brewery’s leadership team. (Photo by Edwin Hammond)

Creature Comforts is located downtown in the old Snow Tire Co. facility. (The old sign still hangs over Hancock Street.) Southern Brewing Company and Terrapin are in industrial areas. The fields that surround them can host massive tailgate parties on football weekends or even a Drivin’ N Cryin’ concert (as Southern did in June). Akademia is the only true brewpub in town (meaning at least 25% of its beer is sold onsite, and half of its revenue from food sales).

“I love that in this town alone, you can have a good ’ole country gathering by a fire pit at Southern one day, you can hang out in your golf shirt and khakis downtown at Creature, or check out a band at Terrapin,” says Matt Casey BBA ’99, the owner of Akademia. Casey’s brewpub stands out not only because of its food menu but also because it’s a family affair. Casey’s wife and three sons all work to expand business. “Every one is a different experience, but they are all tied to Athens.” 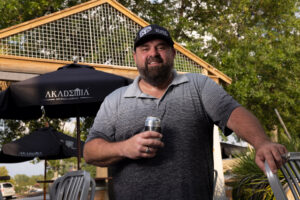 Many of the design touches at Akademia recall ancient Greece. They even extend the patio outside. It’s all part of the Athenian vision of founder Matt Casey BBA ’99. (Photo by Peter Frey/UGA)

Increasingly, they are also tied to the University of Georgia. For instance, Creature Comforts has partnered with the Willson Center for Humanities and Arts for programming related to how businesses partner with communities in positive ways.

Southern Brewing co-founder Brian Roth’s BFA ’95 collaboration with UGA is directly related to his product. The full spectrum of 87 yeast strains that are used in Southern beer are frozen and stored in the departments of microbiology and chemistry.

“We did a huge collaboration with the chemistry department where we ran all of our beer through mass spectrometers, which gave us all kinds of interesting data. It’s kind of cool that all of my collaborations from UGA have been in science, even though I have an art background,” says Roth, who was a sculpture major. The spectrometer breaks down the chemical makeup of beer, allowing the brewer to then adjust ingredients to the beverage’s taste. 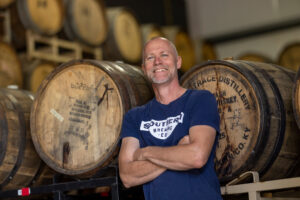 Lake many craft breweries, Southern Brewing Company ages some of its beers in old whiskey barrels, like these behind co-founder Brian Roth BFA ’95. (Photo by Peter Frey/UGA)

The depth of the breweries’ relationship to UGA is just one aspect of how they are truly local leaders. For instance, during the pandemic, Akademia used its kitchen facilities to provide meals to local residents experiencing homelessness. Others stepped up as well.

Southern was one of the few places where fundraisers could be held while socially distant, and several organizations took advantage. Terrapin partnered with Can I Recycle This? to keep recyclables out of the environment. And for years, Creature Comforts has provided local nonprofits with grants through its Get Comfortable program. In 2020, Creature wrote more than $500,000 in checks.

On the business side, since its opening in 2015, Creature Comforts has moved into the top 50 domestic breweries in sales while still remaining independent. And its community-oriented nature is part of its DNA.

“In addition to the commitment that UGA instills, one of the things you learn is that team is important,” says Fenwick Broyard MSW ’13, Creature’s vice president for culture and one of more than a half dozen UGA alumni among the brewery’s leadership. “So now, with the opportunity to step onto a team comprised of so many Bulldogs, really there is no limit to what we can accomplish as a company and on behalf of this community.”