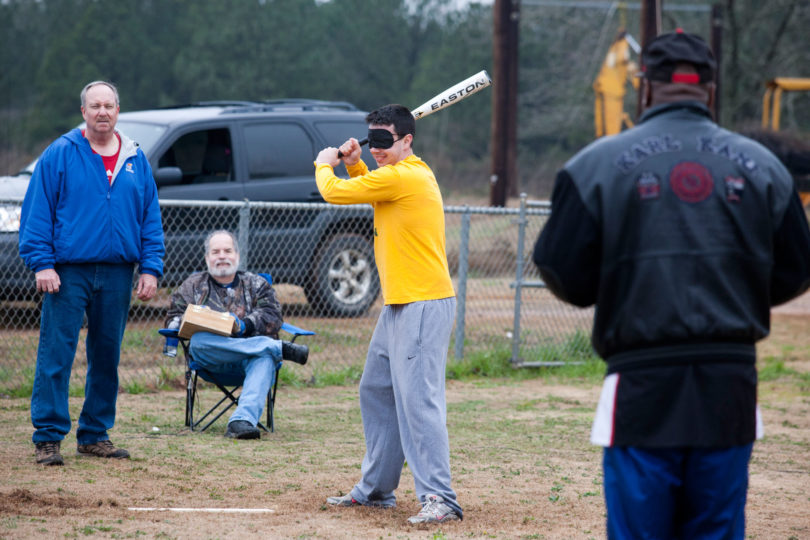 John Dunne prepares to bat during a recent Beep Baseball practice at Smith Field. Dunne is a graduate student in the College of Education sports management program and is the marketing consultant for Athens Inclusive Recreation and Sports. Beep Baseball is an adapted sport for those with or without disabilities.

Beep Baseball is an adapted sports activity for people with disabilities. The Athens team was formed and is led by Athens Inclusive Recreation and Sports, a non-profit organization made up of community volunteers, most of whom are University of Georgia graduates and students.

The event is part of a “home-and-home” rotation of regular season competition from March through July that helps the teams prepare for the World Series of Beep Baseball, this year hosted by Columbus, Ga. from July 29-Aug. 3.

The Athens Timberwolves, who practice every Saturday from 1-4 p.m. at Smith Field, are looking for volunteers to help at practice and during competition.

“Volunteers fill many important positions including: sighted player positions, such as pitcher, catcher, base operator, field spotter and umpire-though the players are sometimes unsure how much visual acuity the volunteer who fills this one possesses,” said Roger Keeney, executive director of AIRS. “Non-impaired volunteers who want to play other positions wear blindfolds to level the playing field.”

Additional volunteer positions, most crucial for the players who are visually impaired, are drivers as many do not get to practice or games without rides, he said.

AIRS’ on-going collaboration with UGA is resulting in some incentives for students as it has become a site for practicum assignments, according to Keeney.

For more information about AIRS, see www.airs-ga.org/. Additional information and video about beep baseball at the elite level is available at www.nbba.org.