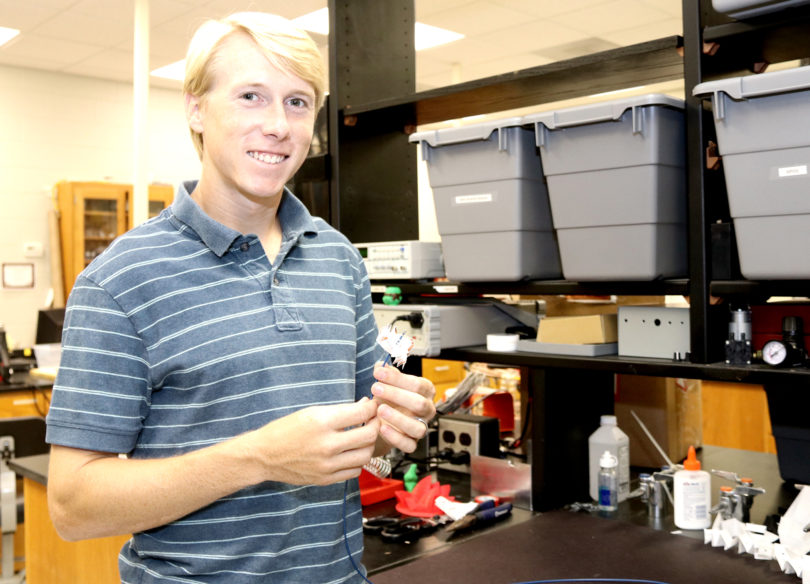 Athens, Ga. – A graduate student in the University of Georgia College of Engineering is turning to the ancient Japanese art of origami for inspiration as he designs a novel cardiac catheter. Austin Taylor is developing a device that’s small enough to fit on the tip of a catheter but expands once inside the heart to provide physicians with high-quality imaging and ablation tools.

Taylor, a biological engineering master’s student from Hoover, Alabama, recently received a $5,000 award from the American Society for Quality to support his work. Richard J. Schlesinger Awards are presented by ASQ’s Biomedical Division to fund undergraduate and graduate projects that promote the awareness and use of quality principles, concepts and technologies in the biomedical community.

Taylor’s device is designed for catheter ablation, a procedure used to treat patients with arrhythmia. In patients with cardiac arrhythmia, the heart may beat too fast, too slow, or erratically. This condition prevents the heart from pumping blood effectively and if untreated, arrhythmia can damage the lungs, brain and other organs. Catheter ablation uses radiofrequency energy to cauterize a small area of heart tissue that is causing rapid or irregular heartbeats.

The device Taylor is working on is unique because it will include magnetic resonance imaging coils that can capture high-quality scans of the inside of the heart during the procedure. Normally, physicians rely on external MRI coils and use electrical impulses generated by electrode catheters to locate abnormal sites in the heart.

“If we can place an imaging coil inside the heart, we’ll be able to locate abnormal tissue more accurately,” said Taylor, who is working in assistant professor Zion Tse’s Medical Robotics Lab. “A major advantage of MRI is its ability to reveal differences in tissue so our goal is to get the imaging device as close as possible to the affected areas inside the heart.”

A second advantage of the device is that it combines imaging technology and ablation tools in the same catheter.

“MRI is very costly, so combining multiple technologies into one catheter can reduce the amount of time the MRI machine is used and thereby reduce costs,” explained Taylor.

When folded, a prototype of the device resembles an origami pinwheel. It opens into a thin, flat sheet that houses the imaging circuitry.

“One of the major advantages of using an origami-inspired design is that you can use very complex shapes that fold down into an incredibly small area,” said Taylor.

Taylor and Tse are seeking a patent for the catheter and plan to reach out to a medical device company to help them manufacture the device at actual scale. In the meantime, Taylor is creating a computer model and working to collect simulation data.

Collaborators on Taylor’s project include Mable Fok, an assistant professor in the UGA College of Engineering and principal investigator in the UGA Lightwave and Microwave Photonics Laboratory; Kent Nilsson, a cardiologist at Athens Regional Medical Center; and Adam Berman, an associate professor of medicine and pediatrics and director of Cardiac Arrhythmia Ablation Services at Augusta University Medical Center. The study is supported by a UGA-Augusta University seed grant led by Tse and Nilsson as well as a National Science Foundation Research Experiences for Undergraduates program led by Leidong Mao, an associate professor in the UGA College of Engineering.