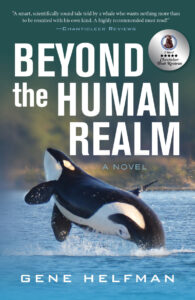 Some 30 years ago, Gene Helfman attended a scientific conference at the Vancouver, B.C., Aquarium. Helfman, an emeritus professor in the Odum School of Ecology, took a break from the evening’s fish talks and wandered outside. He chanced upon a lone orca (killer whale) swimming in the pool where the daytime whale shows occurred. Fascinated at first, Helfman realized that the orca wasn’t swimming but pacing, a caged animal in a confined space.

Thus began a fascination with a species about which he knew little. Devouring the available, and then relatively limited, literature on killer whales, it was obvious that these large, intelligent, highly social animals belonged in the wild, not in small pools forced to perform tricks for food. The idea of writing a novel about a captive orca emerged. However, Helfman, a fish behavioral ecologist, first continued his field research on fish and authored four text and reference books about fish and fish conservation. But the novel was always there, in the background.

Retiring from UGA in 2007, Helfman and his wife, Judy Meyer, a freshwater ecologist, moved to Lopez Island in Washington state. Orcas were constantly in the local news, especially because the iconic Southern Resident killer whales were in serious trouble, and the thought of a novel became more likely.

The finished product, “Beyond the Human Realm,” an animal story for adults, centered on the life of a captive male orca returned to the wild. The novel has received accolades, including a coveted five-star Best Book review from Chanticleer, an international reviewing service, that described it as, “A smart, scientifically sound tale told by a whale who wants nothing more than to be reunited with his own kind. A highly recommended must-read.”

Published by Luminare Press in Eugene, Oregon, “Beyond the Human Realm” is available in print and e-book format. Profits from the sale of the book will be donated to orca conservation efforts. For details, visit https://www.amazon.com/author/genehelfman.