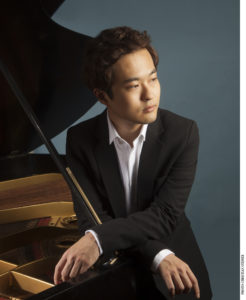 UGA Presents is bringing award-winning pianist Dasol Kim to Athens on Jan. 15 for a 7:30 p.m. recital in Ramsey Concert Hall. He will perform a program of works by Beethoven, Scriabin and Chopin.

Among Kim’s musical endeavors are all 24 Chopin preludes on a single program and the complete cycle of the 32 Beethoven piano sonatas in Switzerland and Korea over a four-year period. As a concerto soloist, he has given performances with the New York Philharmonic in Seoul, Tonhalle Orchestra Zurich, Berlin Konzerthaus Orchestra, Bavarian Radio Symphony Orchestra, L’Orchestre de la Suisse Romande, MDR Leipzig Radio Symphony and Belgium National Orchestra, among others.

Tickets are $30 and can be purchased at the Performing Arts Center box office, online at pac.uga.edu or by calling 706-542-4400. A limited number of discounted tickets are available to current UGA students for $10 with a valid UGA ID (limit one ticket per student).