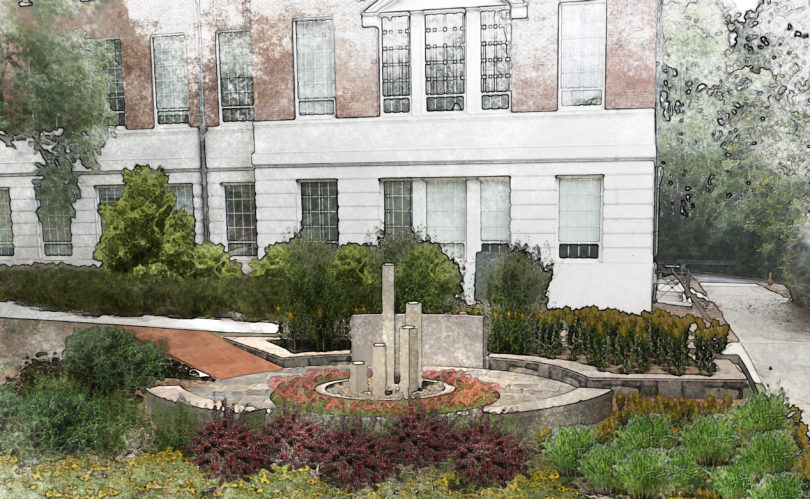 A rendering of the Baldwin Hall memorial.

The University of Georgia will dedicate a new memorial at Baldwin Hall in tribute to those who were buried there. The dedication will take place at 10:30 a.m. on Friday, Nov. 16.

“I am grateful for the work of the members of the advisory task force and for their holistic approach in designing this memorial,” said President Jere W. Morehead. “This memorial will provide the university and local community with an opportunity for meaningful reflection and will permanently honor the men, women and children who were buried on this site more than a century ago.”

Morehead is one of three individuals scheduled to speak at the ceremony. The others will be the Honorable Steve Jones, U.S. District Court Judge for the Northern District of Georgia, and Michelle Cook, UGA’s Vice Provost for Diversity and Inclusion and Strategic University Initiatives.

The memorial, located on the south end of the front lawn of Baldwin Hall, near Old Athens Cemetery, will serve as a place of remembrance for the individuals who were originally buried on this site in the 1800s, most of whom likely were slaves or former slaves. The memorial includes more than 35,000 pounds of granite donated by an Oglethorpe County quarry on land that has been owned by a Georgia African American family for more than a century. Cook is a member of the family that owns the property.

The memorial, which will complement the aesthetic of the university grounds, also includes:

The design was recommended by members of the Baldwin Hall Memorial Advisory Task Force, a group of 18 representatives from the university and the local community appointed by Morehead. Cook chaired the task force, and Jones was a member. Other members included:

The university held a memorial service to commemorate their lives, and a granite marker was placed at the gravesite. Acknowledgment in the form of a plaque also was placed inside the new entrance of the Baldwin Hall addition.