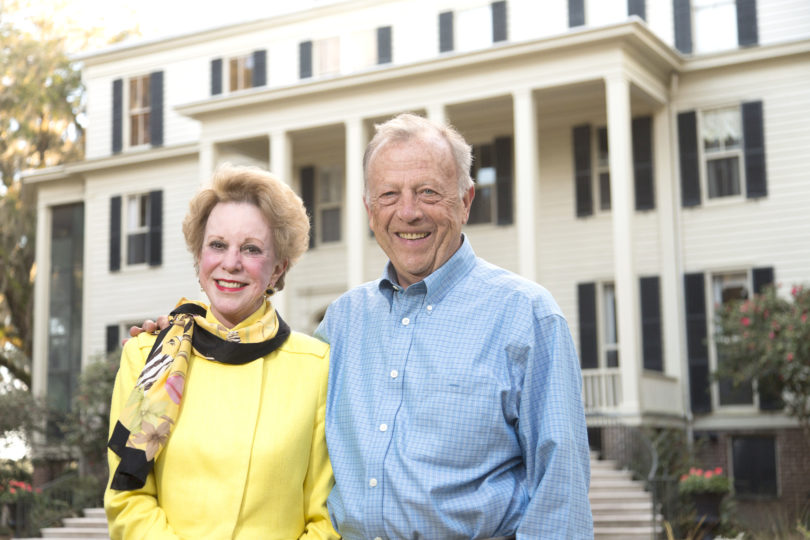 Longtime University of Georgia supporters and alumni Craig and Diana Barrow were awarded the Margaret Douglas Medal by The Garden Club of America for their commitment and service to conservation education at their Wormsloe estate near Savannah.

The national award was given to the Barrows in recognition of their “thoughtful stewardship and generous donation of both land and resources,” said Dede Petri, president of The Garden Club of America.

The Barrows are the ninth generation to live at Wormsloe, located on the Isle of Hope outside of Savannah, since the property was claimed and developed by Craig Barrow’s ancestor Noble Jones in the mid-1730s. Wormsloe is the oldest property in Georgia to be held continuously by the same family.

Wormsloe was placed on the National Register of Historic Places in 1972. That same year, the Barrow family donated 822 acres of the property to The Nature Conservancy, which transferred the land to the state of Georgia to be managed by the Department of Natural Resources as a historic site. The Barrows retained Wormsloe House and the surrounding 50 acres of the property.

In 2007, the Barrows founded the Wormsloe Institute for Environmental History to conserve the undeveloped land on the estate and to promote research and education programs there. 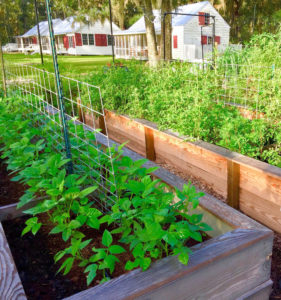 Cabins at Wormsloe provide lodging for students and faculty immersed in experiential learning programs on site.

In 2013, the Barrows, through their Wormsloe Foundation, donated 15 acres of the property to the University of Georgia to establish the Center for Research and Education at Wormsloe. The center provides opportunities for UGA faculty and students to study cultural history and historical land use practices, among other topics, under the direction of Sarah Ross, a member of the faculty of the College of Environment and Design and executive director of the center. In 2016, UGA dedicated two new cabins built on the property to house visiting students and faculty. The cabins were partially funded by the Wormsloe Foundation as well.

In its recognition of the Barrows, The Garden Club of America highlighted the center’s research with 400 varieties of vegetables in the UGA Heirloom Demonstration Garden at Wormsloe. Some of these plants, such as peanuts, blueberries and cotton, are leaders in Georgia’s agriculture industry. Heirloom vegetable trials on site contribute to profitability for coastal Georgia’s family farms by measuring plant productivity, pest and disease resistance, and flood and drought tolerance as well as documenting the preferred flavor profiles.

GCA also recognized the Barrows’ significant backing of landscape stewardship, habitat restoration and sustainable agriculture research on their historic property—all supported largely by UGA programs on site. In addition, GCA cited the significance of the transdisciplinary approach to education provided by the center.

“Craig and Diana are certainly deserving of this national recognition,” said UGA President Jere W. Morehead. “The University of Georgia is grateful for its enduring partnership with the Barrow family and the many ways they are helping us to expand our reach and impact across the state of Georgia and beyond.”

Craig Barrow credits Ross and College of Environment and Design Dean Dan Nadenicek for the work that led to the award.

“Diana and I were overwhelmed with humility and appreciation to be the recipients of such a prestigious award,” Barrow said. “However, we well know that the vision, leadership and hard work of Sarah Ross were largely responsible, as was the work of Dr. Dan Nadenicek and many others at the University of Georgia. The Margaret Douglas Medal not only endorses the university’s work at Wormsloe but also conveys a huge message of support for our many programs.”

Craig Barrow’s ties to UGA are deep. His great-great-great-grandfather, Alonzo Church, was president of the University of Georgia from 1829 to 1859, the longest-serving UGA president in history. Ten generations of the family have attended UGA. In 2010, the Barrows were named Family of the Year by the UGA Alumni Association.

Craig and Diana Barrow were recognized in 2013 as members of UGA’s 1785 Society, which acknowledges donors who have given more than $1 million in cumulative gifts to the university. In addition to the initiatives and research associated with the center, the Barrows’ support has benefited the UGA Libraries, the University of Georgia Press, the Franklin College of Arts and Sciences, the Graduate School and the State Botanical Garden of Georgia.

Craig Barrow is the current chair of the University of Georgia Press Advisory Council. Diana Barrow is a member of the Board of Advisors for the State Botanical Garden of Georgia.

The Wormsloe State Historic Site is open to visitors and includes a museum and theater, picnic area, gift shop and walking trails. Visitors enter the site through an allée of live oak trees draped with Spanish moss. Events there include exhibitions of the tools and skills of Colonial Georgians, led by demonstrators in period dress. Guided tours are offered daily.