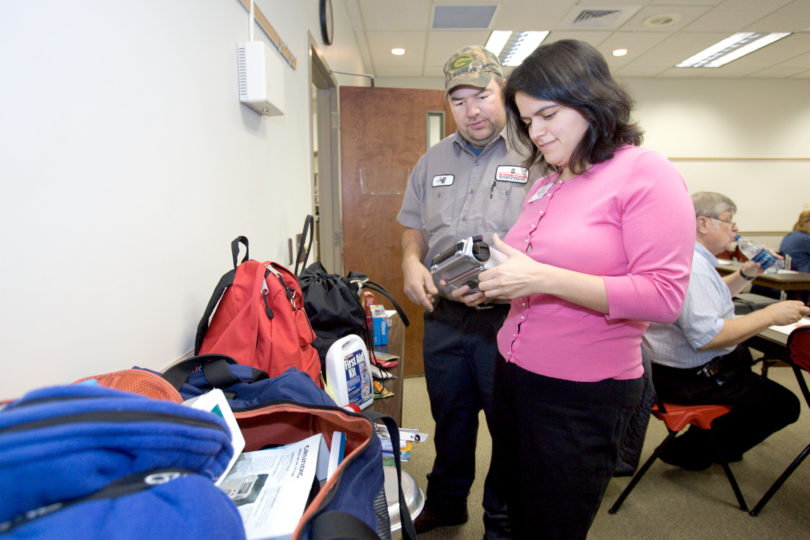 Many credit the terrorist attacks of Sept. 11 with starting a trend toward disaster readiness in America. After the attacks, the federal government started a Department of Homeland Security, which began issuing national alert levels and urged Americans to keep supplies on hand in case of the unforeseen.

Then came Katrina and Rita, hurricanes which made many Georgians question how much help government could be in the event of a disaster, according to a recent Peach State Poll conducted by the Vinson Institute of ­Government.

But while the official response to eroded public confidence in government’s ability, it spurred a move toward self-reliance that UGA’s Opal Haley says is critical to surviving the initial impact of disasters.

Haley, the director of the Office of Security and Emergency Preparedness, says emergency responders may not be able to reach victims for up to 72 hours. Relief organizations like the American Red Cross may take 24 to 48 hours to open shelters, and, depending on the scope of the disaster, it could be days or longer for adequate food and other supplies to reach everyone affected.

“The question I hear the most often is, ‘Are we ready for a disaster?’ and my response is always, ‘I’m prepared. Are you?'” she says.

In addition to overall emergency planning for UGA, Haley’s department offers a class for UGA employees regarding emergency preparedness on an individual scale. For two-and-a-half hours every quarter, Haley and her staff instruct attendants on how to piece together survival kits, what do in case of specific emergencies and how to prepare for the unexpected.

Every person who can survive on their own for the first day or two is one less person emergency responders have to worry about. Being prepared for floods or earthquakes could mean a staggering difference in death tolls and injuries, according to Haley.

“Each unprepared person affects the entire community,” she says.

Assembling a supply kit together for a flash flood or tornado may take time away from other things, the rewards of securing safety are good incentives for most people, she argues.

“Imagine the worst thing that can happen to your family. When that happens if this makes things even just a little bit easier for you, is it worth it?” she asks. “The answer is different for everyone, so everyone prepares differently.”

Preparing can range from keeping water, food, flashlight and a radio, in a knapsack in the closet to building a bomb shelter. Each person’s survival kit should be personalized to their needs, but too many people neglect the possibility of unforeseen events, or don’t heed warnings.

To put it another way, the worst disasters are the one’s for which we don’t prepare. The solution? Know what’s likely to happen and what to do in each situation, according to Haley.

Statistics that claim 45 U.S. states are prone to earthquakes or tornadoes can drop out of thunderstorms without warning, are more than ominous warnings to ponder, according to Haley. They should be heeded.

The March class brought visitors from across campus. Emergency buffs joined staffers who were creating readiness plans for their offices and employees seeking information for their family’s safety.

The class is free for university employees and is conducted at the Training and Development Center on Thomas Street. The next class is June 6. The staff also presents programs for departments upon request. Interested employees can e-mail the Office of Security and Emergency Preparedness at uosp@uga.edu or call 542-5845.