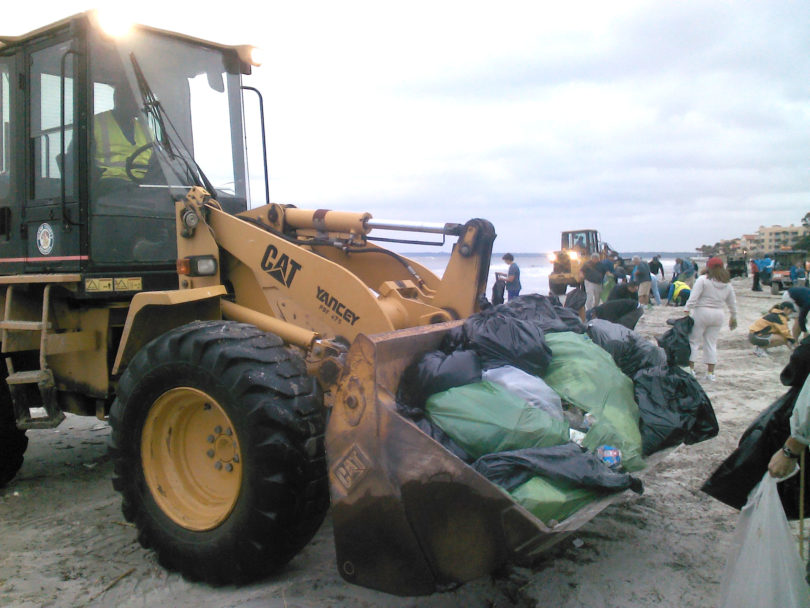 Athens, Ga. – The University of Georgia Marine Extension Service and Georgia Sea Grant, public service and outreach units, are reaching out to Athens and the UGA community through social media sites to prevent littering on St. Simons Island beach the Friday before the annual Georgia-Florida football game. Volunteers are also being sought to clear the beach of litter at the Community Beach Sweep, which will be held Nov. 2 at 7:30 a.m. on St. Simons Island.

The past several years, thousands of pounds of waste have been left on the beach after football fans and visitors tailgate and celebrate before the football game.

It is estimated that approximately 8,000 football fans and visitors gather on St. Simons Island beach each year to celebrate before the Georgia-Florida game. Due to the volume of partygoers, large amounts of litter—such as coolers, beverage cans and glass bottles—are left on the ground.

The social media sites encourage football fans and visitors to “Stash Your Trash” in the appropriate bins and containers provided during the big event. The sites also include a pledge for Georgia fans to sign, promising to reduce waste during their stay.

“We are particularly interested in partnering with UGA fraternities and sororities and the UGA Athletic Association to help get the word out,” said Lea King-Badyna, who works at the UGA Marine Extension and Georgia Sea Grant’s Brunswick facility. “The trash that football fans leave behind has far-reaching impacts on Georgia’s coastal ecosystem and marine life.”

The waste left behind potentially could be pulled out to sea during high tide, harming marine life and contributing to the growing problem of marine debris in the oceans. Georgia’s tides rise and fall between 6 to 10 feet twice a day.

King-Badyna said that wherever Georgia fans stay for the game, they are urged to reduce, reuse, recycle, be conscious of the impacts of their trash and to leave behind favorable reputations of Georgia fans and not trash.