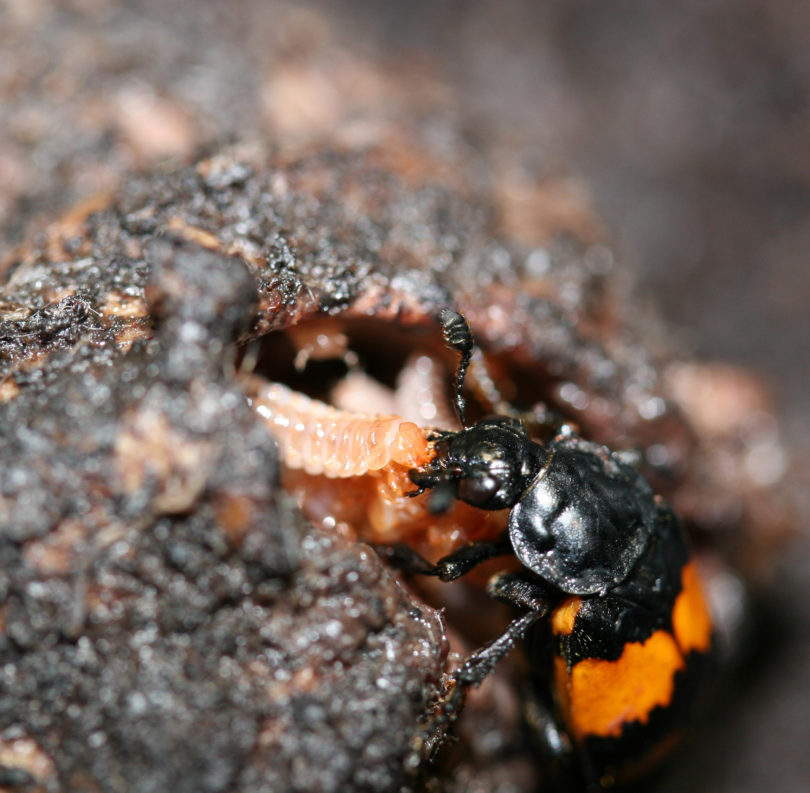 A female burying beetle feeds her begging young. The parent and offspring are in a mouse carcass prepared by the parent as food. (Credit: Allen Moore/UGA)

Athens, Ga. – A team of researchers including scientists from the University of Georgia has identified many of the genetic changes that take place in burying beetles as they assume the role of parent. Their findings, published recently in the journal Nature Communications, may provide clues about the fundamental genetics of parenthood in insects and other animals.

Burying beetles are the undertakers of the animal kingdom. True to their name, these winged insects scavenge the wilderness in search of small animal carcasses, which they bury under the soil to save as a food source while they care for their offspring.

This is unusual behavior; most insects do not care for their young. But burying beetles take an extraordinarily active role. They prepare food, protect the brood from invaders and even feed their begging offspring much in the same way that a bird feeds its hatchlings.

“Parenting is a complex trait, but it’s particularly complex in burying beetles,” said the study’s co-author Allen Moore, a Distinguished Research Professor of Genetics in UGA’s Franklin College of Arts and Sciences. “Sometimes the male or female may care for the brood as a single parent, and sometimes they appear to work as a couple. By examining changes in genes associated with parenting, we got a clearer picture of what’s really happening.”

Scientists have long presumed that burying beetles were one of the few insect species to co-parent their offspring, but the research team’s genetic tests cast serious doubt on that assumption, Moore said. The fundamental idea was that males and females that stayed together did so because they were compatible; they made up for individual weaknesses by joining forces.

“If that were true, you’d expect two parents to be better than one, but we didn’t see that at all,” Moore said. “Offspring raised by a single parent fared just as well as those that appeared to be raised by two parents.”

The researchers allowed 269 pairs of male and female beetles to co-mingle in a closed environment complete with food sources, and they observed their behavior as they raised their offspring. About 50 percent of the time, males would abandon the nest after mating, leaving the female to care for the brood alone. Females, on the other hand, only abandoned the nest 5 percent of the time.

Regardless of its sex, when a single parent cared for the young, the researchers found that beetles expressed specific genes that control parenting behaviors. But when beetles appeared to act as a couple, the story was different.

“If you just observe a pair of beetles, they may look like they’re working as a team,” Moore said. “But our genetic analyses showed that males really weren’t doing much of anything. They did not express the genes necessary to care for offspring, so the females were actually doing most of the work.”

Males and females may work together to bury a carcass and prepare the nest. But once their eggs hatch, the duties of child care generally fall to one parent, and that’s usually a female, Moore said.

While these discoveries will help scientists better understand the social dynamics of burying beetles, Moore and his colleagues hope that similar genetic approaches could be used to study the behavior of other animals.

“We know now which genes are turned on and off while these beetles raise their young,” Moore said. “Next, we want to see if those same genes influence social interactions in other species.”

The study, “Transcriptomes of parents identify parenting strategies and sexual conflict in a subsocial beetle,” is available at www.nature.com/ncomms/2015/150929/ncomms9449/full/ncomms9449.html.