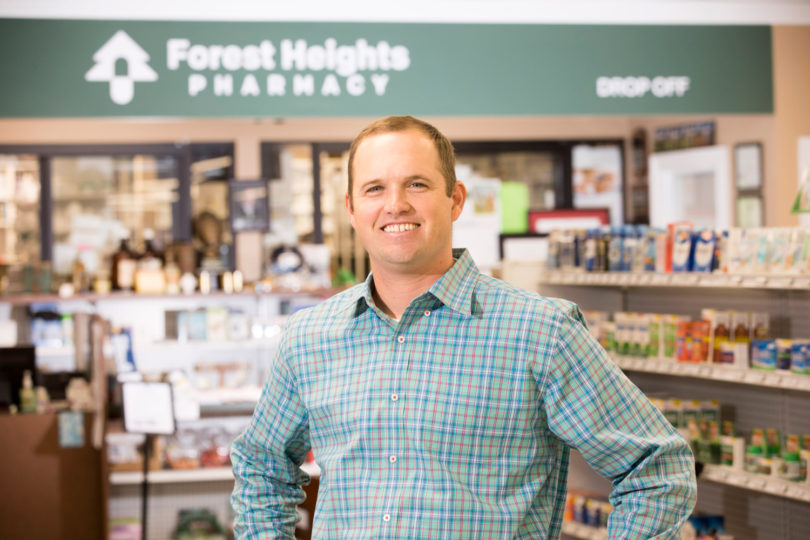 As a boy, Ben Ross PharmD '08 worked in his father's pharmacy in Sylvania. After graduating from the College of Pharmacy, he went into business for himself, and business is booming. (Photo by Dorothy Kozlowski/UGA)

That Thursday, he took his final boards to become a licensed pharmacist. On Saturday, he married his longtime girlfriend, Lauren Scott. Their honeymoon followed, and the day after it was over, Ross PharmD ’08 started his new job as a pharmacist and co-owner of Forest Heights Pharmacy in Statesboro.

That week was the culmination of a path that began roughly when he learned to walk.

Ross’s father, Virgil “Sonny” Ross BSPH ’74, had run the pharmacy in their hometown of Sylvania (about an hour south of Augusta) since before Ben and his brother Matt AB ’04 were born. As children, they helped out when they could. When Ben got his driver’s license, his first job was as a delivery driver. When he entered the University of Georgia’s College of Pharmacy, Ross spent his summers working in the back of the store, learning about the business first-hand.

“I’m passionate about the profession of pharmacy and about the independent setting,” says Ross.

That independent setting is important. For many rural Georgians (and rural Americans, for that matter), the only way they can get what are frequently life-saving prescriptions is through independent pharmacies. Their hometowns are just too small for chains to service.

That’s where pharmacists like Ben and Sonny Ross come in. In the case of the senior Ross, they can serve their communities for decades, becoming institutions in the process. Ben and his dad discussed him joining the family business, but his role in Statesboro was fast-tracked when his dad’s partner at Forest Heights was diagnosed with cancer and needed to retire from the business. That’s when Ben stepped in.

“Serving our community is a core value,” Ross says. “We were a new store, and not being originally from Statesboro, we didn’t know a lot of people. We built the store from the ground up. It was a struggle, but it’s been a great experience.”

For Ross, serving the community meant becoming part of that community: He is a Rotarian and serves on the boards of Ogeechee Technical College and a local bank. In that time, Forest Heights has also expanded to include a gift shop that Lauren manages. Their children—Lanie, 9; Lucy Kate, 5; and Reid, 1; —are frequent visitors.

The gift shop isn’t the only way Ross’ portfolio has grown.

When Sonny Ross retired in 2018, Ben became the majority owner of the pharmacy in Sylvania. Since the summer of 2018, Ross has acquired partnerships in three additional independent pharmacies in rural eastern and southeastern Georgia: Coastal Drug in Midway, Crawford & Breazeale Drug in Lincolnton, and Clark Drug in Waynesboro. At two of the locations, his partners are fellow UGA alumni—Starr Clark BSPH ’87 in Waynesboro and Samir Shah PharmD ’08 in Lincolnton.

At Ben Ross’s pharmacies, management remains local, and he is dedicated to his adopted hometown. The roots he planted in Statesboro back in 2008 have grown pretty deep, and he understands the needs of the community.

“When you own an independent pharmacy, it’s so much more than a business,” he says. “Your customers are your family. You want to make sure they are taken care of.”