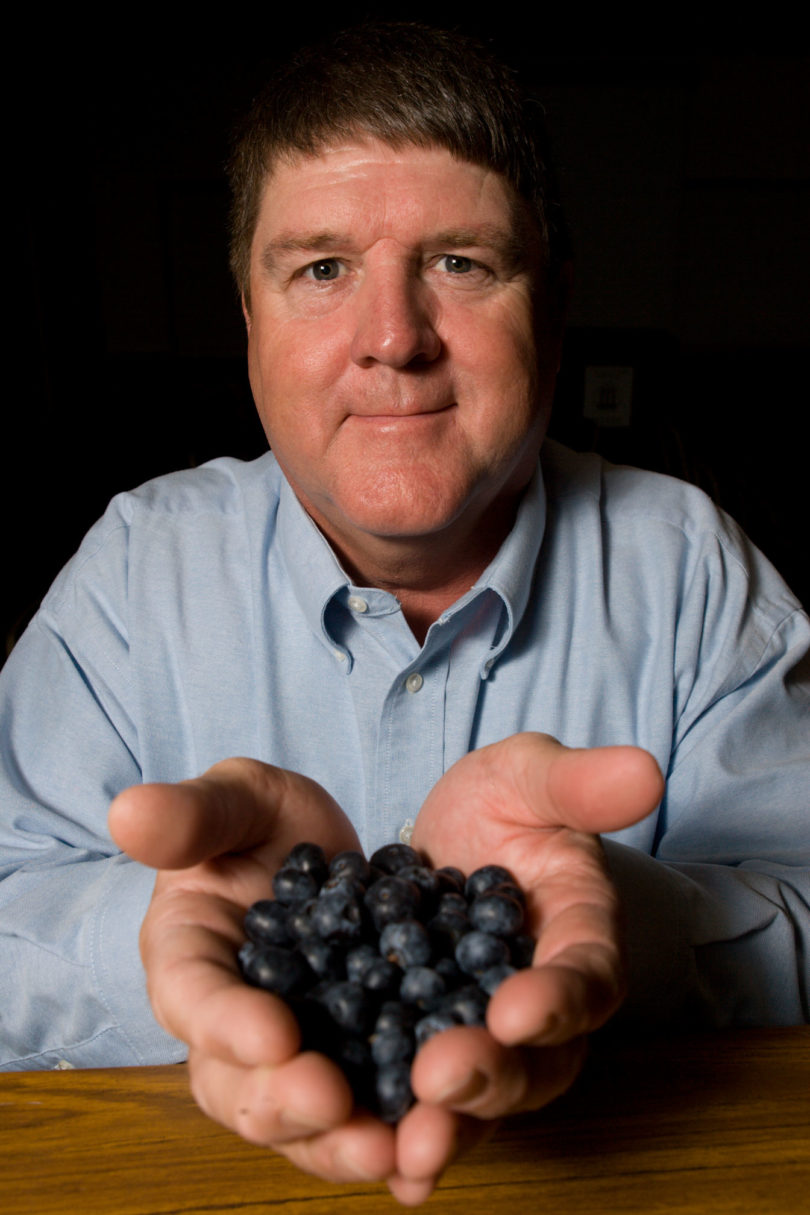 Blueberries may not be the cure-all for everything from cancer to economic instability, but their popularity is on the rise in Georgia. And health-conscious fans have a new choice: organic blueberries.

The little berry bush, native to the U.S. Southeast, is hardy and disease-resistant in a climate that hurts organic agriculture more than it helps. Where fruit crops such as peaches, apples and strawberries have a hard time surviving insects and diseases, blueberries thrive.

And organically grown blueberries might be just the boost small towns in south Georgia need to thrive themselves.

“A lot of areas where blueberries grow are economically depressed,” said Gerard Krewer, a UGA Cooperative Extension horticulturist in Tifton.

Conventional blueberry farms are concentrated in South Georgia. Organic production “would perhaps keep people from moving away from the areas and would definitely benefit the local communities,” said Harald Scherm, a plant pathology professor in the College of Agricultural and Environmental Sciences.

“Organic is harder,” Krewer said. “We don’t have magic silver bullets, so to speak, that make the job of growing so much easier.”

For years, Krewer has studied organic blueberries on a shoestring budget. When he started working on larger projects in 2005, he started looking for more funding.

He, Scherm and colleagues at the University of Florida were awarded a grant from the U.S. Department of Agriculture Integrated Organic Program. Their goal over the next three years is “to develop best management practices and economic cost analyses for organic blueberry production,” Scherm said.

“Recently, organic produce has become much more widely available due to mass merchandising, chain stores and marketing,” Krewer said. “There’s been a real change in the mind-set as some of the growers realize the demand.”

Blueberries have their roots buried deep in Georgia soil. The rabbiteye blueberry is native to southeast Georgia and northeast Florida. It can grow organically despite pest and disease problems caused by the region’s high humidity.

“We’re trying to see how farmers should use these products and developing a set of management guidelines for weeds and fertilizers,” he said. “We’re also looking at insect management organically, through biological controls and biopesticides.”

And while they’re checking the scientific side, UGA economist Greg Fonsah is looking at the economic feasibility of organic blueberry production.

“Much of the grant focuses on horticulture, what happens in the field,” Krewer said. “But what also matters is the economics of growing organic blueberries.”

“This acreage is expected to further increase in 2007,” he said.  “More growers are getting interested in this crop, which is now ranked second in the state’s fruit and nut industry.”

The demand for blueberries is partially due to their high nutritional value. They contain vitamins A, C and E and their antioxidants may help prevent certain cancers. “There has been a tremendous expansion of overall blueberry production as people realize the health benefits of blueberries,” Scherm said.