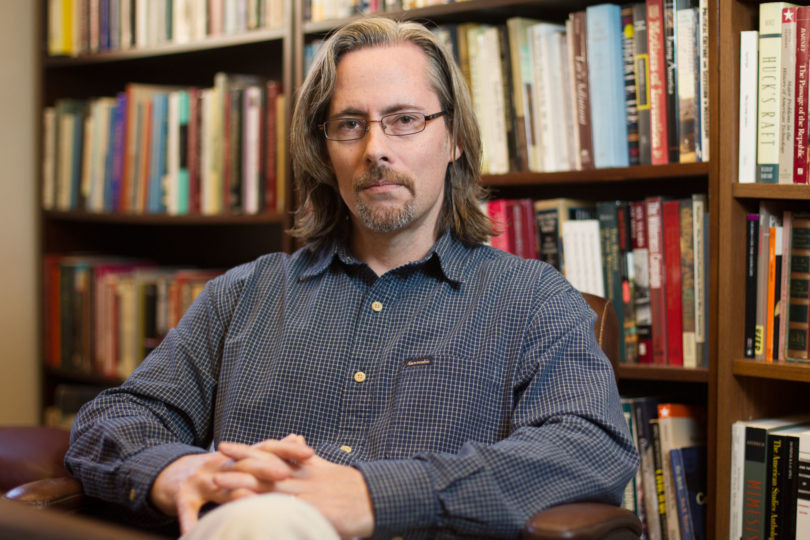 Athens, Ga. – Noted historian Stephen Berry has been named the inaugural holder of the Amanda and Greg Gregory Chair in the Civil War Era in the University of Georgia Franklin College of Arts and Sciences.

Berry, the author of four books on the Civil War era, joined the university’s department of history in 2007 and was selected as the Gregory chair after a national search.

“I can think of no UGA scholar more worthy of this honor than Steve Berry,” said UGA President Michael F. Adams. “He is a historian of the first order, and his research and writing have helped not only thousands of students but also many people, like myself, who have an ongoing interest in the Civil War. I am deeply grateful to the Gregorys for their generosity to the university and support of this important position in the history department.”

Berry’s first book, All That Makes a Man: Love & Ambition in the Civil War South (Oxford University Press, 2003) was a finalist for the 2004 Peter Seaborg Award for Civil War Scholarship. Princes of Cotton: Four Diaries of Young Men in the South, 1848‐1860 (UGA Press and the Southern Texts Society, 2007) was described in one review as “an extraordinary contribution to Southern history.” House of Abraham: Lincoln & the Todds, A Family Divided By War (Houghton Mifflin, 2007) was a Book of the Month Club main selection and received a Publisher’s Weekly starred review. A reviewer of Berry’s most recent book, Weirding the War: Stories from the Civil War’s Ragged Edges (2011, UGA Press), wrote that “saying something truly new about the American Civil War seems impossible, but here is a book that offers an explosion of new perspectives and insights, often surprising and sometimes disturbing.”

In addition to authoring several articles in scholarly journals, Berry has written for magazines such as Civil War Monitor and North and South. He has given presentations at more than 20 conferences as well to historical associations, civic groups and primary and secondary school teachers.

“Steve Berry has developed in a short period of time a national reputation as a leading scholar of the Civil War era. His work brings a fresh perspective to one of the defining periods in our nation’s history,” said Hugh Ruppersburg, interim Franklin College dean. “The support of the Gregorys continues to elevate a department with established strengths in Southern history to the great benefit of our students and faculty.”

Berry has received fellowships from the National Endowment for the Humanities, the Gilder Lehrman Institute of American History and Andrew W. Mellon Foundation. His honors include the Organization of American Historians Distinguished Lecturer Award and the Parks-Heggoy Award for Excellence in Teaching Graduate Students, which is voted on by graduate students studying history at UGA.

In addition to their gift to establish the Gregory Chair in the Civil War Era, the Gregorys have supported research in Civil War era studies for graduate students and faculty members and funded an annual lecture series that brings prominent historians to UGA to conduct seminars with students and to deliver a public lecture.

The Gregorys have strong ties to UGA. Greg earned his bachelor’s degree from the Grady College of Journalism and Mass Communication, while Amanda received a bachelor’s degree from the College of Education. Greg has served as a member of the Terry College of Business board of advisers and delivered guest lectures to Terry students. He currently serves as a trustee to the UGA Foundation and is a member of the Franklin College Dean’s Council. In addition, he serves on the advisory board that oversees George Washington’s Mount Vernon Estate, Museum and Gardens.

Greg retired as president and CEO of the commercial real estate firm Industrial Developments International in 2007, and Amanda taught in public and private elementary schools in Atlanta for more than a decade.