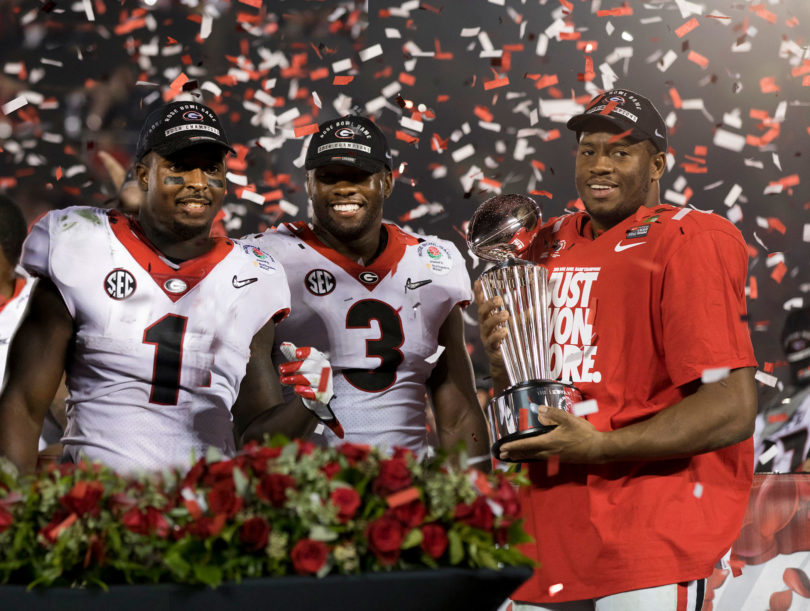 The SEC Champion Georgia Bulldogs defeated the Oklahoma Sooners 54-48 Jan. 1 in the 104th Rose Bowl in Pasadena, California. The win earned the Bulldogs a trip to the College Football Playoff National Championship Jan. 8 in Atlanta. A Championship Watch Party will be held at Stegeman Coliseum for UGA faculty, staff and students. (Photo by Dorothy Kozlowski)

Carter and Michel, two of the Bulldogs’ talented seniors who came back to Georgia for their final seasons, are now two Rose Bowl champions headed home—or close enough, anyway—to play for a national championship Jan. 8 against Alabama.

The Bulldog Nation also ­believed.  Thousands of them made the trip to support the football team, the cheerleaders and the Redcoat Marching Band, which also took part in the Rose Parade earlier on Jan. 1.

Finally, when it was over, the Bulldogs and their fans could exhale: Georgia over Oklahoma, 54-48, in double overtime, in a thrilling New Year’s Day College Football Playoff semifinal.

Down by 17 in the second quarter as the defense struggled against the Sooners’ speedy and explosive attack, Georgia kept going.

Dominant for all of the third quarter and then up seven, 38-31, early in the fourth, No. 3 Georgia kept going.

Suddenly down again, with 6:52 remaining in the game, after the No. 2 Sooners got their ­offense going again and also returned a Michel fumble 46 yards for a touchdown, Georgia kept going.

Trailing 45-38 late in the fourth quarter, Georgia drove 55 yards to draw even, scoring on a 2-yard Nick Chubb run with 55 seconds left. The Bulldogs converted a critical third-and-10 from the Sooners’
23-yard line to keep the drive going, with quarterback Jake Fromm hitting wideout Terry Godwin for 16 yards.

In the first overtime—the first overtime in the history of the oldest of all the bowls, this the 104th edition—Georgia had the ball first and got a Rodrigo Blankenship 38-yard field goal for a 48-45 lead.

The Sooners got the ball first to start the second overtime and on third down it looked like Georgia cornerback Deandre Baker had snagged a critical interception in the end zone, but the Bulldogs were flagged for being offside on the play. They kept going.

Georgia’s defense forced a fourth-and-5 at the 10-yard line and the Sooners sent Seibert back out there for a 27-yard try.

The ball rolled harmlessly into the end zone after Carter’s block—the first field-goal block of his life, he said—and now all the Bulldogs needed were some points to win a thrilling, back-and-forth game. They kept going.

A first-down run lost two yards. They kept going. On second down, Michel lined up in the shotgun, with Fromm wide to the left. Michel took the direct snap and ran Fromm’s way. Everybody did their job blocking, including the freshman quarterback, and just like that Michel had gone 27 yards into the end zone for the game-winner.

For the Jan. 8 game, a Championship Watch Party, sponsored by the President’s Office, UGA Athletics the Tate Student Center-Center for Student Activities & Involvement and UGA Student Affairs, will be held at Stegeman Coliseum.

Because of space limitations and the unavailability of Sanford Stadium due to construction, attendance is open only to students, faculty and staff with a valid UGACard. Doors open at 6:30 p.m., and the game begins at 8 p.m.

The SEC clear bag policy for athletic events will be enforced. More information is at http://bit.ly/2lEm6w1.