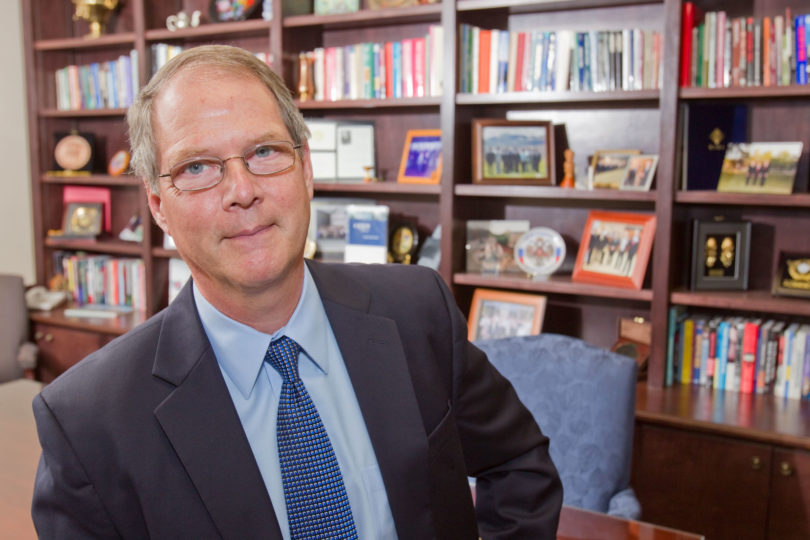 Since joining the UGA faculty in January

Painted plates from China, ornate artifacts from India, hanging tapestries from Japan. These are the objects that decorate the Center for International Trade and Security. They’re also what director William W. Keller uses to illustrate the unique position that his office occupies within the university.

Founded in 1987 to stem the proliferation of technologies and materials that underlie weapons of mass destruction as well as to promote research, teaching and outreach on issues related to high-tech trade and security, CITS is in the rare position of having a greater international focus than a domestic one.

“We’re one of the best kept secrets in Georgia, but known throughout the world,” Keller is fond of saying.  “If you go to China or Austria, people know us, but if you ask students out there on the quad about us, they might say ‘Oh, CITS. I think I’ve heard of them.’ ”

Appointed to the post in January, Keller comes to UGA from the University of Pittsburgh, where he directed the Matthew B. Ridgway Center for International Security Studies. At CITS, he serves a five-year term as the first full-time director following the retirement of CITS founder Gary Bertsch. During his tenure, Keller hopes to expand the center’s role in educating students and secure a larger endowment.

“We’re trying to make the world safer by creating norms, customs and laws that help to control dangerous nuclear, chemical and biological materials,” he said. “We’re also trying to promote trade in legitimate high-tech items and educate the next generation of nonproliferation experts.”

That last part is especially important to Keller, who teaches an undergraduate course called “Proliferation and Terror in the 21st Century.”

“One of our goals involves tying ourselves more deeply to the teaching and research missions of the university,” he said. “We want to see the center more involved in teaching undergraduates and eventually contributing to a master’s degree program in nonproliferation and international security.

“We already have a Security Leadership Program, where 12-15 very talented UGA juniors and seniors are put through a rigorous security course, and then travel to Washington, D.C., to meet government officials and nonproliferation experts,” Keller added. “The vast majority of students who participate in the program go on to get a security-related job after graduation.  So I’d like to see more of that. I’d also like to see us take a greater role in helping UGA reach out to its international constituencies.”

Not only does CITS teach students,  it also teaches professionals.

“We’re educators. We work closely with the School of Public and International Affairs, the School of Law, Globis and the Dean Rusk Center,” he said. “We bring people from around the world—from governments, corporations and non-governmental ­organizations—to Athens for our Security and Strategic Trade Management Academy to train them on how to deal with weapons of mass destruction and strategic trade issues.”

As the center seeks to expand its educational mission, it’s also bolstering its other role as an international nongovernmental organization. Among other projects, the center is building its Program on Global Nuclear Governance to promote the security and safety of nuclear facilities.  It also continues to increase its role in second-track negotiations between and among governments and other groups that have interests in nuclear power, WMDs, strategic trade and counterterrorism.

As Keller put it: “We’re a little organization from Georgia sitting right in the middle of international relations.”