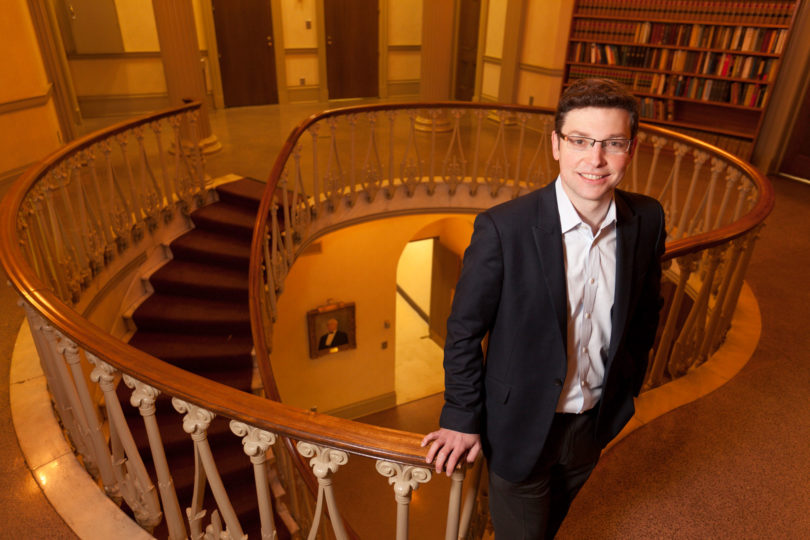 While some professors will tell you that they always knew they wanted to teach and conduct research, international law professor Harlan G. Cohen takes a slightly different approach.

“I looked around at people who I thought had really interesting jobs, and I noticed that they all had one thing in common—they had been willing to take advantage of good opportunities when they came along,” Cohen said. “So, I tried to set myself up to be in a position where interesting opportunities would come along and hoped that when they did I would have the courage to take them.”

This philosophy led Cohen from Yale to Washington, D.C., where he worked for the Washington Institute for Near East Policy and for Foreign Affairs, the pre-eminent journal in foreign policy. Along the way, he earned a master’s degree and a law degree.

“The whole time I was moving in the direction of academia without even realizing it,” Cohen said. “After graduating from law school, I began to write an article just to see if I could, and I enjoyed it so much that it confirmed for me that this was the direction I wanted to go.”

Now, eight years later, opportunity has placed this School of Law associate professor in the position of helping plan one of the biggest international law conferences in the nation.

As co-chair of the American Society of International Law’s annual meeting, Cohen is working with two other professors from across the country to determine the subject matter of this influential event that will be held during March in Washington, D.C., and will include 35 panels and multiple keynote speeches. In essence, he is helping to set the research agenda for those in his field.

“This conference really serves as a focal point for international law around the world,” Cohen said. “That is what makes serving in this position both exciting and complicated. You are basically trying to figure out what the most pressing topics are that people need to be talking about in international law this year.”

This year’s theme is “Confronting Complexity.”

While it has been a daunting task to help narrow down and select the specific problems the conference should focus on, Cohen said the support of his co-chairs and the meeting’s program committee as well as that of the Georgia Law community has been invaluable.

“I have benefitted enormously from the school’s longstanding commitment to international law, and I get an amazing amount of support for what I do. I’ve also benefitted from the extraordinary quality of student at Georgia Law,” he said. “I think you get a lot of ideas from teaching. I am constantly challenging my students to question where international law is today and how to make it better, and I feel like I learn as much from my classes as I hope they do from me.”

Cohen said this symbiotic relationship is one of the things he loves the most about academia.

“What we are all trying to do at some level is better understand how our world works and every interaction we have helps us to inch towards that goal—whether it is in the classroom, through scholarship or through a community of scholars,” Cohen said. “The life as a lawyer scholar is so extraordinary because all of these things work together. There is no real line between them.”