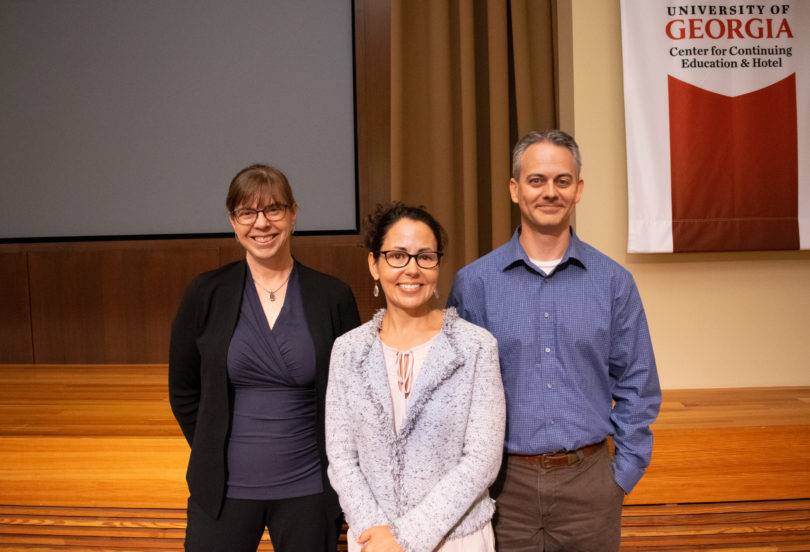 Spoiler alert: It is not possible to clone a wooly mammoth

This information undoubtedly will disappoint “Jurassic Park” fans, but it comes from an expert—Beth Shapiro, the UGA alumna and evolutionary biologist who wrote the book “How to Clone a Mammoth: The Science of De-Extinction.” Shapiro returned to campus April 4 to deliver the George H. Boyd Distinguished Lecture.

During her talk, “Can—and Should—Technology Reverse Extinction?,” Shapiro introduced the audience to the field of ancient DNA and outlined the science required to bring a species back from extinction. Essentially, researchers can’t clone a woolly mammoth if they don’t have access to a living woolly mammoth.

“It is not possible to bring back mammoths, or passenger pigeons, or Neanderthals, or Adolf Hitler, or the dodo, or sabre-toothed cats, dinosaurs, the thylacine, the great auk, the Carolina parakeet, or the gastric brooding frog,” said Shapiro, professor of ecology and evolutionary biology at the University of California, Santa Cruz; Howard Hughes Medical Institute investigator; and 2009 MacArthur Fellow.

Though the woolly mammoth will remain extinct, technological advances make it possible for scientists to create a genetic match for a living creature—your dog, for example. But it would not actually be your dog, according to Shapiro.

“We and everything else are much more than the sequence of the As and Cs and Gs and Ts that make up the code of our DNA,” she said.

That same technology—a targeted gene editing tool known as CRISPR—may, however, be useful in helping species that are in danger of becoming extinct. CRISPR allows scientists to search for a genetic sequence and replace it with a sequence from another animal or even another species.

“As we’re facing an extinction crisis, and climates and habitats are changing too fast for evolution to keep up, these technologies may be something that we can do to try and save some of these things from becoming extinct,” she said.

The black-footed ferret, for example, was thought to be extinct until a population was discovered in the mid-1980s. They were bred successfully in captivity, but died of sylvatic plague when released into their habitat.

Scientists are hoping to stage a “genetic rescue” by increasing diversity—and resilience—in the population using genetic sequences from two black-footed ferrets collected prior to the population crash by the Frozen Zoo in San Diego. A similar strategy worked for the American chestnut tree, which survived fungal blight after researchers introduced a blight-resistant gene from wheat.

Humans have been altering DNA sequences for as long as we’ve existed, Shapiro noted.

“It’s just that these technologies are making these things that we normally do over many thousands of years in trial and error much easier to do,” she said.

The field is young, and scientists can’t know all the potential consequences ahead of time, but Shapiro believes the potential benefit of genetic rescue is worth the risk.

“I would argue, looking at the 20,000 species that are in danger of becoming extinct within the next several decades, it’s far riskier not to think about these technologies, to allow the science to develop,” she said. “It’s far riskier not to do that, because we’re going to lose all of this.”

The Boyd Lecture Series brings national leaders and policy makers in science, education and related fields to the university to talk about applications of research to contemporary issues in education. The series is supported by the Office of Research and the William S. and Elizabeth K. Boyd Foundation.