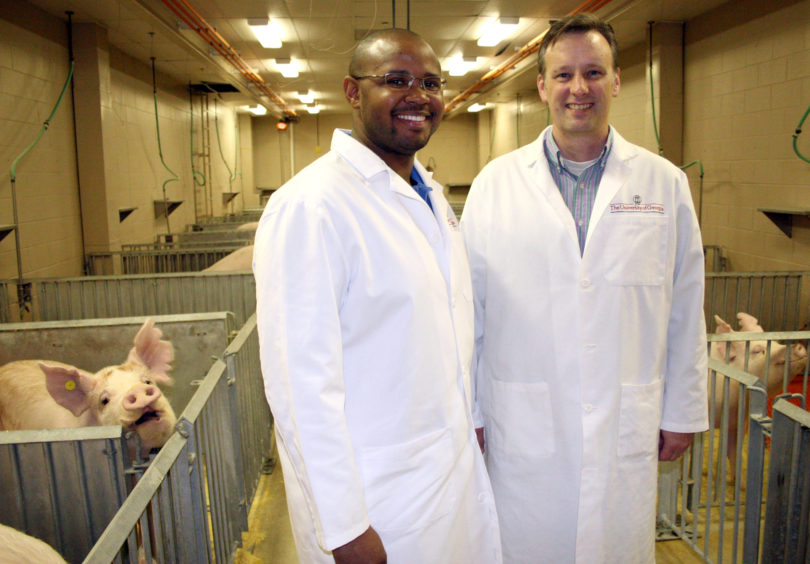 Rodent studies are likely inadequate for testing many human therapies, including pharmaceuticals, since 50 percent of all chemicals test positive as carcinogens in rodents regardless of their source or identity, said Thomas Hartung, a professor in the Bloomsburg College of Public Health at Johns Hopkins University.  He suggests these studies may be no more conclusive than a coin toss. For example, some components in coffee appear to be carcinogenic in rodents, but in humans moderate coffee consumption may reduce the risk of cancer.

“Pluripotent stem cells have significant potential for stem cell therapies,” said West, an animal science researcher and assistant professor in the College of Agricultural and Environmental Sciences. “However, tests in mice often resulted in tumor formation that frequently led to death.”

The formation of tumors has raised concerns about the safety of induced pluripotent stem cells, or iPSCs, and cells derived from these stem cells. Until now, all iPSC safety studies have been performed in rodent models.

“Being able to safely use iPSCs without the potential of causing tumors is essential for this promising stem cell therapy to become a viable treatment option,” said Stice, a Georgia Research Alliance Eminent Scholar in the College of Agricultural and Environmental Sciences. “We now have graduate students working on making neural cells from the human and pig stem cells to help further the studies. The human stem cells were effective in a rodent model for stroke, but rodent studies are not rigorous enough to start human clinical trials.”

“Over 700 drug treatments have gone to human clinical trials for stroke alone based on findings in rodents and have turned out not to be viable in humans,” he said. “The pigs are much more human like, and they are going to be a much better model to study strokes.”

West is leading a cooperative project between the UGA Regenerative Bioscience Center and stroke researchers at Georgia Health Sciences University.

“This project will improve the speed and efficiency of treatment development for stroke and many other conditions and potentially ­reduce the number of nonhuman primates used in research,” he said.

Additionally, Stice and West have now bred the pigs produced from iPSCs and have proven the stem cells did pass to the offspring. This finding opens the door for better animal-sourced tissue for human regenerative medicine such as islet cells that produce insulin for diabetic patients.

Using iPSC technology, the Bioscience Center is working with researchers at Emory University to make pigs whose cells from the pancreas would demonstrate decreased rejection in human treatments.

“The next step would be to put these pig insulin-producing cells into other animals, potentially dogs or cats suffering from diabetes—to see if it will produce insulin for them without being rejected,” Stice said. “So, it’s moving forward. Never as fast as we like, but it’s moving.”