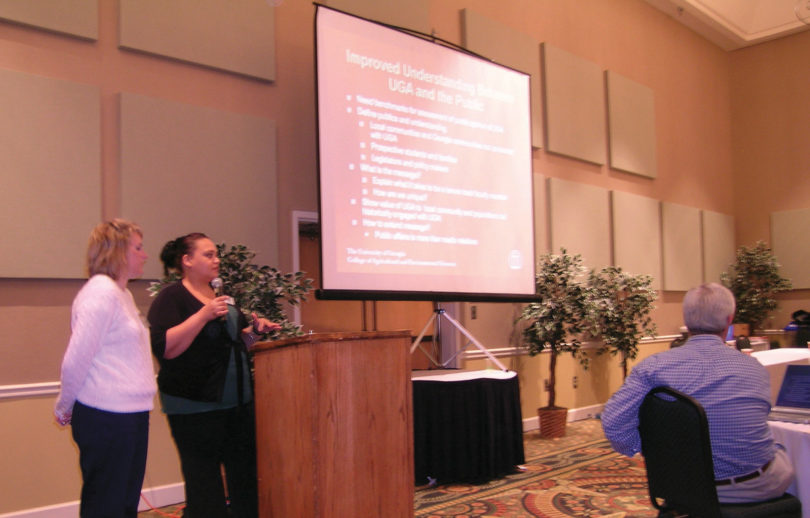 Contrary to popular belief, the current generation of college students does not think “it’s all about me.” But the percentage of those exhibiting Narcissistic Personality Disorder has risen over time-from 3 percent of those 65 and older to 10 percent of those 20-29.

Jean Twenge, associate professor of psychology at San Diego State University and author of Generation Me, cited such data in her keynote speech at the annual Academic Affairs Faculty Symposium, which this year focused on “Understanding Our Students: Ethos, Experience and Expectations.”

“There is no subject more important than understanding our students, particularly as we prepare to launch the First-Year Odyssey Seminar program this fall,” Provost Jere Morehead told the more than 50 faculty members-many of them assistant or associate professors-who attended the two-day symposium, coordinated by the UGA Teaching Academy and held in late March at Unicoi State Park.

Twenge also has co-authored The Narcissism Epidemic: Living in the Age of Entitlement with Keith Campbell, professor and department head of psychology at UGA.

In addition to research she has conducted with Campbell and other colleagues, Twenge referenced data from the American Freshman Survey, which has collected information on incoming college students for the past 25 years.

In 2010, three-fourths of those surveyed rated their academic abilities as “above average,” while positive ratings of their emotional health plummeted, indicating record levels of stress. Twenge sees the results as related-with students lacking tools to cope when their inflated ideas of their abilities collide with reality.

Twenge’s advice on what faculty should do for GenMe students, especially first-years, includes frequent feedback and grades, communicating expectations and rules clearly, and offering opportunities for interactive learning.

In addition to Twenge’s presentation, symposium participants heard from Tim Foutz, director of the First-Year Odyssey Seminar program, who said that more than 200 proposals had been submitted by faculty interested in teaching the small group seminars, with more expected in the coming weeks. The proposals can be viewed on the FYO website (fyo.uga.edu).

The First-Year Odyssey program also was one of the topics discussed in five break-out sessions. Eight students attending the symposium lent their points of view to these sessions and contributed to the group reports presented at the close of the symposium.

Other topics discussed in break-out groups included small vs. large classes, lower vs. upper division courses, non-traditional classes, and student support and development. Brief reports produced by each group will be posted on the Teaching Academy website (teachingacademy.uga.edu).

The reports included a number of recommendations including the creation of a “centralized information depot”-perhaps set up as GO.UGA.EDU-to provide easy access to academic and student support resources.

“There are a wealth of resources at the university,” said Brock Tessman, an assistant professor in the School of Public and International Affairs. “The challenge is access and awareness.”

Other recommendations included having more graduate TAs support large classroom instruction by faculty and creating small grants for innovative teaching, both of which the provost said he supported.

“These are proposals that we can do, that make sense,” Morehead said, calling on the Office of the Vice President for Instruction, the Teaching Academy and the Center for Teaching and Learning to give him specific details needed to implement the recommendations.

In other symposium sessions, participants heard a panel discussion on student support with Jean Chin, executive director of the University Health Center; Julie Segrest, administrative manager of the Division of Academic Enhancement; and Mark Compton, a Meigs Distinguished Professor in the College of Agricultural and Environmental Sciences who also has been named Outstanding University Advisor.

Another session on student learning featured presentations by Franklin College faculty members Jody Clay-Warner and Kathrin Stanger-Hall, who have conducted research on using peer groups to enhance learning in their
classrooms.

President Michael F. Adams joined the group for dinner and provided a briefing on the current session of the Georgia General Assembly beforehand. After dinner, symposium participants were able to ask questions of the provost during the “fireside chat” that has become a tradition of the annual gathering.

“It was a great experience to talk to faculty about their plans for instruction,” said Chris Sanders, a senior in the Terry College of Business, following the symposium. “That’s a perspective students don’t often get to see. I knew our faculty cared about students, but I didn’t know they devoted so much time to trying to improve the student experience.”