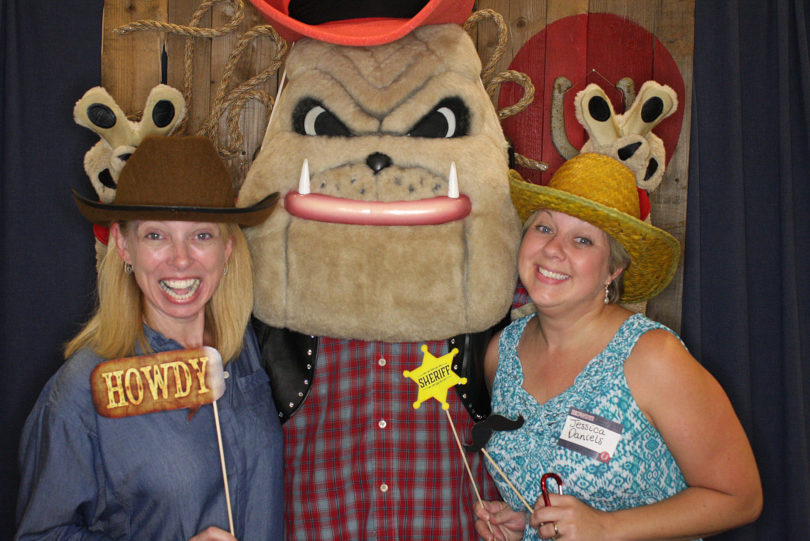 University thanks faculty, staff and retiree donors at reception

UGA thanked faculty, staff and retiree donors who supported the university in fiscal year 2015, which ended June 30, with a Western-themed reception. Held Sept. 1 in the Tate Student Center Grand Hall, the reception celebrated the 1,905 faculty, staff and retirees who donated nearly $4 million to help UGA achieve a record-breaking fundraising year, a 40 percent increase over 2014.

More than 275 faculty, staff and retirees were in attendance, and UGA President Jere W. Morehead and Kelly Kerner, UGA’s vice president for development and alumni relations, thanked them for their generosity.

“You have set an example that says to our alumni and friends on whose philanthropic support we depend, that we believe in UGA so much we are willing to give of our own resources to further its advancement,” Morehead said. “With your support, the University of Georgia is reaching new heights of excellence.”

Several scholarship recipients and students from the Arch Society and Student Alumni Council were in attendance to thank donors who have improved their university experiences.

The Office of Donor Relations and Stewardship, a unit of the Office of Development, hosted the reception as part of the “ThankU” initiative, which promotes an attitude of gratitude at UGA.

“The goal of the reception was to show appreciation to faculty, staff and retirees who supported the university by making a gift during FY15,” said Tony Stringer, director of donor relations and stewardship. “It is important to show potential donors that UGA faculty and staff members believe strongly in the university’s mission, and one way to do that is by making an annual gift. University employees commit themselves every day to making UGA a more vital institution, and when they show their financial support, it demonstrates pride in our great institution and speaks volumes about UGA as a place for philanthropic investment.”

The event included a chili bar, s’mores station and a Western-themed photo booth, where attendees had the chance to take photos with mascot Hairy Dawg, who was dressed in his cowboy best. A slideshow that featured faculty and staff “Why I Give” quotes played throughout the event.