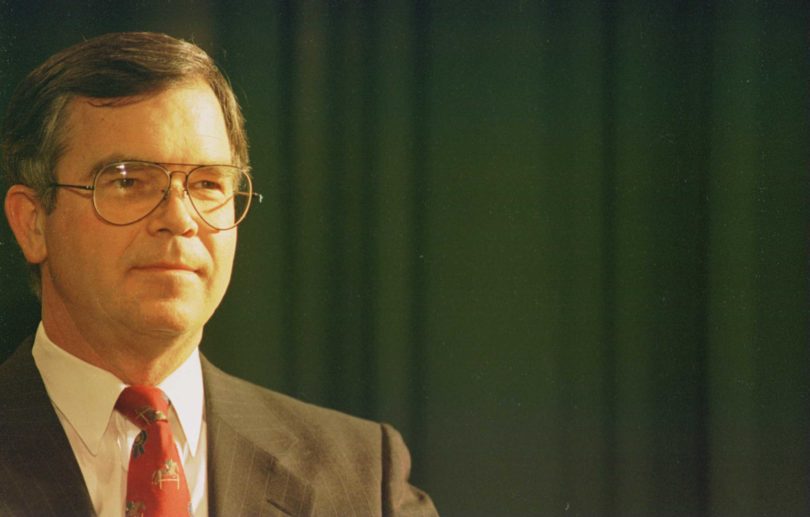 Atlanta Committee for the Olympic Games President and CEO Billy Payne listens to questions from the media before the 1996 Olympic Games he masterminded. Payne, a Double Dawg, is a Georgia Groundbreaker. (Getty Images)

UGA alumnus’s successful campaign to land the Centennial Olympic Games is celebrated in a documentary airing July 17 at 7 p.m. on the SEC Network.

This is part of a series, called Georgia Groundbreakers, that celebrates innovative and visionary faculty, students, alumni and leaders throughout the history of the University of Georgia — and their profound, enduring impact on our state, our nation and the world.

The story of Atlanta’s emergence as an international city began, as unlikely triumphs often do, with one man’s improbable dream.

And yet, William Porter “Billy” Payne was not known as a dreamer. In fact, before 1987 — when he resolved to bring the 1996 Centennial Olympic Games to Atlanta, in defiance of all odds — the then-middle-aged real estate lawyer wasn’t widely known at all.

But Payne has become one of the era’s most celebrated Georgians thanks to his sheer determination and a unique ability to unite others in pursuit of his long-shot ambition. Payne’s success in winning the Olympic bid and preparing the city for the games effectively put Atlanta on the global map and became the catalyst for growth in tourism, private investment and international prominence that continues to this day.

Born in 1947 while his parents were undergraduates at the University of Georgia, Payne grew up as a self-described “passionate Georgia Bulldog.” Raised in Atlanta, he returned to Athens for college, playing UGA football like his father, Porter Payne, a former all-star who’d served as team captain. Earning his bachelor’s degree in political science and then his law degree from UGA, the younger Payne co-founded a small firm in Atlanta. 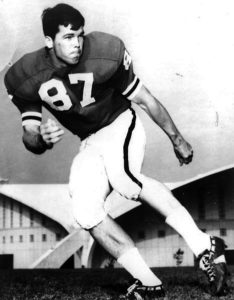 Billy Payne played football for the Georgia Bulldogs as an undergraduate working on a political science degree in the late 1960s.

Payne’s Olympic epiphany came to him soon after the dedication of a new sanctuary at his church, which was built with money he helped to raise.

“My wife Martha and I were driving home from church and I said, ‘You know, that was a really special feeling … we’ve got to think of something else,’” Payne said in a 2014 interview with the Atlanta Journal-Constitution. “The next morning, I go to my law practice. I got my legal pad. I’m writing down things that would motivate people. Something big. Driving home that night, I was still thinking. Then the Olympics jumped into my mind … I walk in and said to my wife, ‘I’ve got it, we’re going to bring the Olympics to Atlanta.’”

Payne left his law practice and took out a substantial bank loan to cover his family’s living expenses. Recruiting former Atlanta Mayor and U.N. Ambassador Andrew Young as a partner in persuasion, he spent the next three-and-a-half years traveling to 110 countries selling Atlanta to Olympic officials — many of whom had never heard of the city.

A new vision for Atlanta

“At the time, Atlanta was mostly associated with the Civil War and civil rights struggles, but I wanted to showcase its diversity and can-do spirit, and the collective strength of its people,” Payne says today, looking back at the lengthy Olympic bid process. “I wanted the world to see an aspect of the United States they didn’t know existed.”

During the 1980s, Georgia’s capital city had seen its downtown wither, its infrastructure decay and its population shrink. But beginning the morning of Sept. 18, 1990, when it finally won the Centennial Games, Atlanta moved quickly to get ready for its star turn. As president and CEO of the Atlanta Committee for the Olympic Games — the first time a bid chief had also overseen preparations — Payne led the way, wrangling more than $400 million in corporate sponsorships, enrolling thousands of volunteers, and working with local and state officials to get everything built on time. 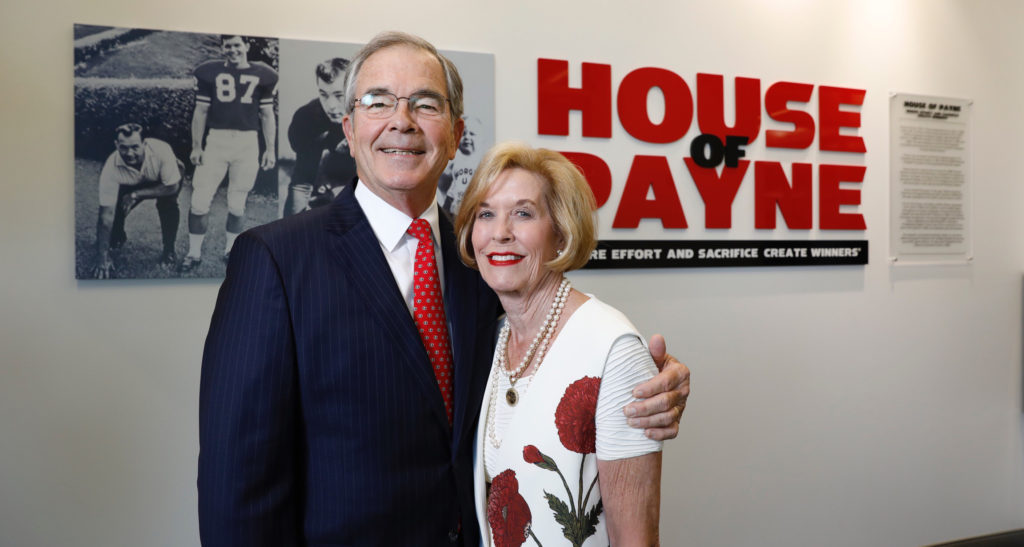 Billy and Martha Payne before the celebration on April 30 for the naming of the William Porter Payne and Porter Otis Payne Indoor Athletic Facility. (Photo by Andrew Davis Tucker/UGA)

But Payne still felt something was missing. From his window in the Inforum Convention Center one day in 1993, he looked down on the acres of blighted warehouses on the western edge of downtown and envisioned a park that could serve as a gathering space for visitors and locals during the Games. Despite the tight deadline, he persuaded then-Gov. Zell Miller, state lawmakers and Atlanta officials to fast-track the purchase of the land for the construction of a vibrant city center.

“The most defining part of the games was the creation of Centennial Olympic Park, which transformed Atlanta’s downtown,” says Dick Yarbrough, who served as ACOG’s managing director of communications and government relations. “Getting that park built is as good a testament to Billy’s enormous drive and vision as winning the games in the first place.”

When a terrorist’s bomb left two people dead and dozens injured halfway through the games, the park served as the scene of both Payne’s deepest anguish and fulfillment.

“My greatest memory is the reopening of Centennial Olympic Park after the bombing, with Andy (Young) giving an extraordinary speech,” Payne says. “The moment represented the power of resilience in the face of adversity.”

Payne is proud that he was able to bring the Olympics to his alma mater as well.

“It became obvious to me — rationally and emotionally — that our great flagship university should be part of our plans,” he says. “I could not imagine having the Olympics in Atlanta and not including UGA.” 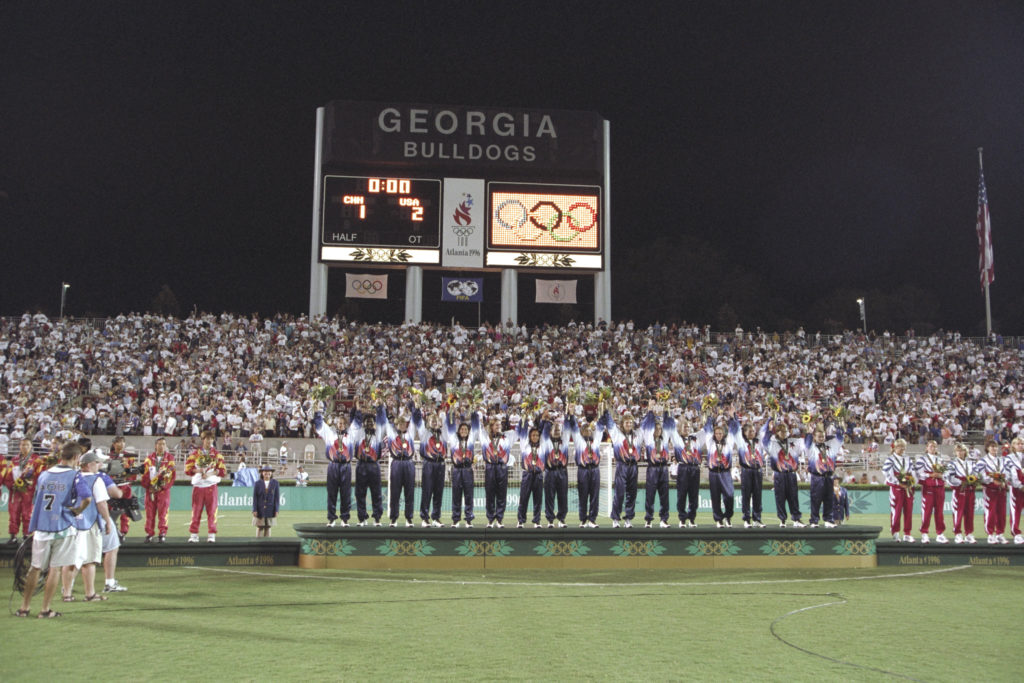 The U.S. women’s soccer team won the gold over China in Sanford Stadium at the 1996 Olympic Games. (Photo by Rick O’Quinn/UGA)

In addition to hosting volleyball matches and rhythmic gymnastics trials, the school saw a women’s soccer attendance record set when 76,489 fans packed Sanford Stadium to watch the final between the U.S. and China — an event that sparked a wave of interest in women’s soccer.

The apex of Payne’s salesmanship arguably came when he talked his old coach, Vince Dooley, and the university administration into allowing the stadium’s hallowed hedges to be temporarily removed to accommodate the soccer field.

Atlanta surges as a city

After the games ended, some pundits predicted for Atlanta the kind of slump that befell Barcelona, with empty venues, vacant hotel rooms and dwindling civic coffers. Instead, Atlanta embarked on a prolonged surge. The number of foreign consulates shot up. International tourism kept hotel rooms full. The city became a magnet for corporate headquarters.

Two years after the games, Hartsfield-Jackson Atlanta International Airport became the world’s busiest airport, a distinction it continues to hold. And Centennial Olympic Park became ringed with billions in new commercial development and cultural attractions, including the Georgia Aquarium, World of Coca-Cola, the College Football Hall of Fame and the Center for Civil and Human Rights — helping jump-start what is now a busy and booming downtown.

“For Atlanta, the Olympics were a global networking opportunity beyond anything in its history and enhanced the city’s reputation as a world-class destination,” says Jeff Humphreys, director of the Simon S. Selig, Jr. Center for Economic Growth at UGA’s Terry College of Business. “The games served as a catalyst to trade and tourism, affecting subsequent decisions regarding corporate relocations; foreign and domestic investment; government spending; and the locating of major conventions and sporting events.”

The University of Georgia community as well as people across the state owe Billy Payne an enduring debt of gratitude for his vision and service.” — UGA President Jere W. Morehead

On April 30, 2018, the University of Georgia permanently recognized the many contributions of Payne and his father with the formal naming of William Porter Payne and Porter Otis Payne Indoor Athletic Facility. The naming opportunity is the result of gifts totaling $10 million, donated by friends of Billy and Porter Payne.

“The University of Georgia community as well as people across the state owe Billy Payne an enduring debt of gratitude for his vision and service,” said UGA President Jere W. Morehead. “I cannot think of a more fitting way to honor Billy and his late father Porter than to permanently attach their names to the athletic program at their alma mater.” 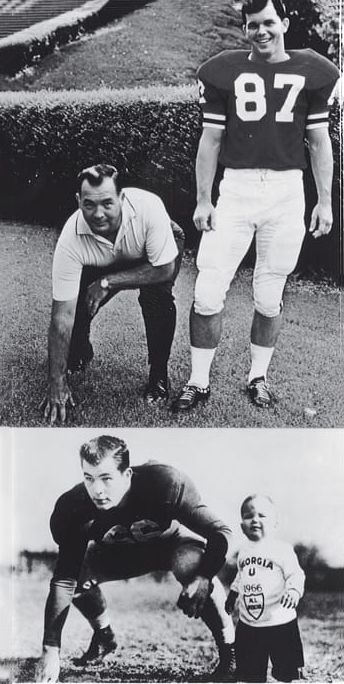 Billy Payne with his father, Porter.

Says Payne: “My dad was a wonderful man, tough but kind, and my role model in all things. To be forever linked with my dad and this facility is a much appreciated honor.”

Especially dear to Payne is the memory of taking part in the Olympic torch relay — more of a hobble for him shortly after back surgery — inside UGA’s Sanford Stadium, when he tipped the torch toward the seat where his late father had watched his son play football.

After the Olympics, Payne had more accomplishments ahead. In 2006, he became chairman of the Augusta National Golf Club, one of the nation’s most exclusive clubs and home of the famed Masters Tournament. In 2012, he again made history by opening the club’s membership to women. He retired in 2017.

But Payne undoubtedly will be best remembered as the man who wouldn’t give up on a far-fetched dream of bringing the world to his hometown.

“Homecoming” with Billy Payne
“Homecoming,” the special hosted by SEC Network on-air personality Paul Finebaum, airs periodically throughout the year and features notable SEC alumni returning to their schools. In Tuesday’s episode, airing July 17 at 7 p.m. ET, Finebaum goes in-depth with Billy Payne, former chairman of Augusta National Golf Club and president and CEO of the Atlanta Organizing Committee for the 1996 Olympic Games. A two-time graduate of the University of Georgia, earning both his bachelor’s degree and his J.D. in Athens, Payne shares his recollections of life in Athens, where he was born while his father was a football player for the Bulldogs. Payne and Finebaum also discuss Payne’s career playing at Georgia, as well as his memories of the Atlanta Olympics and Augusta.