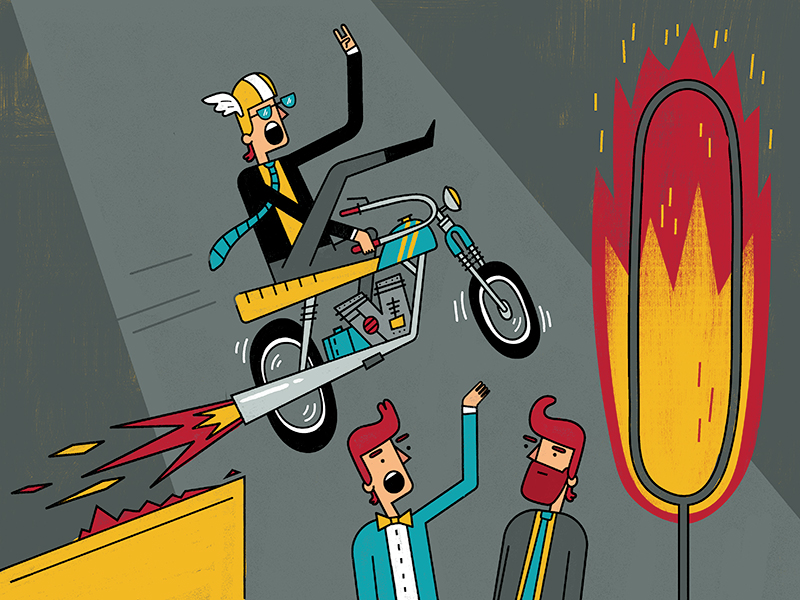 Younger siblings often take more risks as chief executives, just like they did when they were kids trying to keep up with their older brothers and sisters, according to University of Georgia management researchers.

“They have to compete with siblings just to get their parents to spend time with them and to spend money on them. In order for them to get what they want, they had to take more risks,” said co-author Scott Graffin, who holds the Synovus Chair in Servant Leadership at the Terry College of Business.

A higher level of risk-taking is associated with those who are later in their birth order. Statistically, the results were 19% more risk for the second oldest, up to 38% more for the third born, according to “Born to Take Risk? The Effect of CEO Birth Order on Strategic Risk Taking.” The study by Graffin and Robert J. Campbell, a doctoral student in strategic management who graduated in 2019, was published in the Academy of Management Journal.

Previous studies have examined how different characteristics of CEOs, such as how long they have held the position, the amount of power they have and current job responsibilities, are of primary importance in their decision-making. The Terry researchers are advancing strategic management research with their findings about how birth order shapes CEOs and their strategic decisions.

“This research reveals that who you are coming into the job defines a lot of how you will approach decisions as CEO,” Graffin said. “We are looking at how their childhood upbringing shapes them as people.”

Evolutionary theory suggests that sibling rivalry drives the effects of birth order. Siblings use different behaviors to increase their parents’ investment in their welfare — including time and money — and birth order drives these choices, according to the researchers.

Older siblings tend to get the first helping of attention from parents and have the upper hand because they are bigger and more physically developed, Graffin said. Fighting over everything from making friends to playing games instilled in many younger siblings that they must take risks to get the same things that may come more easily to older children. Other research has shown younger siblings are more likely to participate in high-contact sports, pursue risky behaviors such as stealing, and make dicey investment decisions.

“How you interacted with your family at a very young age comes to define how you see the world and how you interact with it,” Graffin said.

For their study, Graffin and Campbell analyzed data, including birth order, gender and age of each sibling and the size of the family, from 71 CEOs of 67 family-controlled, South Korean business groups from 1999 to 2015. Those companies included Samsung, LG Corp. and Hyundai.

The researchers created a risk-taking measure that was a composite of how much firms spend on three factors: mergers and acquisitions, research and development, and capital expenditures. They found that the natural tendencies CEOs developed as a child are a strong determinant of risk-taking.

“CEOs with older siblings tend to take more risks as CEOs because they’re used to doing that to get the things they want,” Graffin said.

The findings were supported when the researchers analyzed personal data of about 36 CEOs of U.S. corporations by using figures from the U.S. Census Bureau and Ancestry.com.

‘It sticks with them’

“This is really the first study to look at the family dynamics of someone growing up and how it influences their decision-making on the job,” Graffin said. “It’s something from the way-back machine that happened a long time ago that imprints who a CEO is, and it sticks with them their whole life.”

Risk-taking also increases as the age gap between a CEO and the closest-born sibling narrows, because the closer in age to a sibling, the more intense the rivalry, Graffin said. In addition, if a sibling also is a CEO, the effect is even stronger.

CEOs typically are thought of as analytical leaders who utilize data to make the best decision possible, but this study shows that even family dynamics will influence how they solve problems.

“Regardless of who you are, you’re going to bring certain biases and perspectives to a decision,” Graffin said. “The best thing you can do is take an inventory of yourself. Self-awareness is one way you can make better decisions.”

With evidence that birth order affects the strategic risk-taking of CEOs in public corporations, governing boards also may want to consider how they incentivize CEOs, the researchers noted. They suggest that in the case of a younger-born CEO, the board may not want to tie the compensation to incentives, if they do not want the organization to take much risk.

The researchers were surprised to find that the effect did not weaken with age. The range of ages in the study was 35 to 93.

“Your sibling rivalry and your family dynamics continue to influence who you are throughout your entire life,” Graffin said.

The study was co-authored by Seung-Hwan Jeong at Georgia State University.