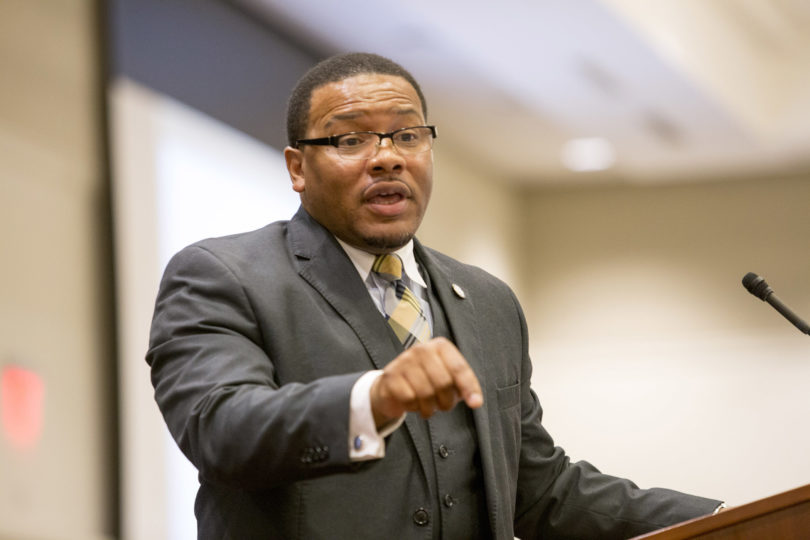 The Rev. Francys Johnson, state president of the Georgia NAACP, gave the keynote address to the crowd, telling them that more work on social justice is needed.

UGA President Jere W. Morehead welcomed the crowd, saying how the record-setting turnout spoke well to the BFSO’s efforts in diversity and inclusion.

“As you look back now over the last 13 years, this scholarship luncheon, sponsored by the Black Faculty and Staff Organization, has made a difference in the lives of our students,” he said. “I think all of you can take great pride in being a part today of something that’s very important and very significant at this institution.”

Johnson, who graduated from the UGA School of Law in 2004, said that everyone is where they are now because of the work of others. He shared that he had a pastor who “insisted” he go to college despite Johnson not even thinking about higher education at the time.

Johnson thanked the BFSO founders, who were in attendance, telling them he understood the challenges they went through to form the group back in the early 1980s.

“We can look now years removed and fill up a ballroom, but it was downright dangerous what you did,” he said. “I know that.”

During his speech, Johnson told the crowd that they cannot rest on their accomplishments and must keep pushing forward.

“Your agenda cannot be to herald what you’ve already done,” he said. “So my question to the Black Faculty and Staff Organization is, ‘What is your agenda? Will you be satisfied to pass out awards and congratulate yourselves, or will you realize these are no ordinary times, these call for men and women to again pick up the work, focus on an agenda, to know you are only here because someone came before?’ “