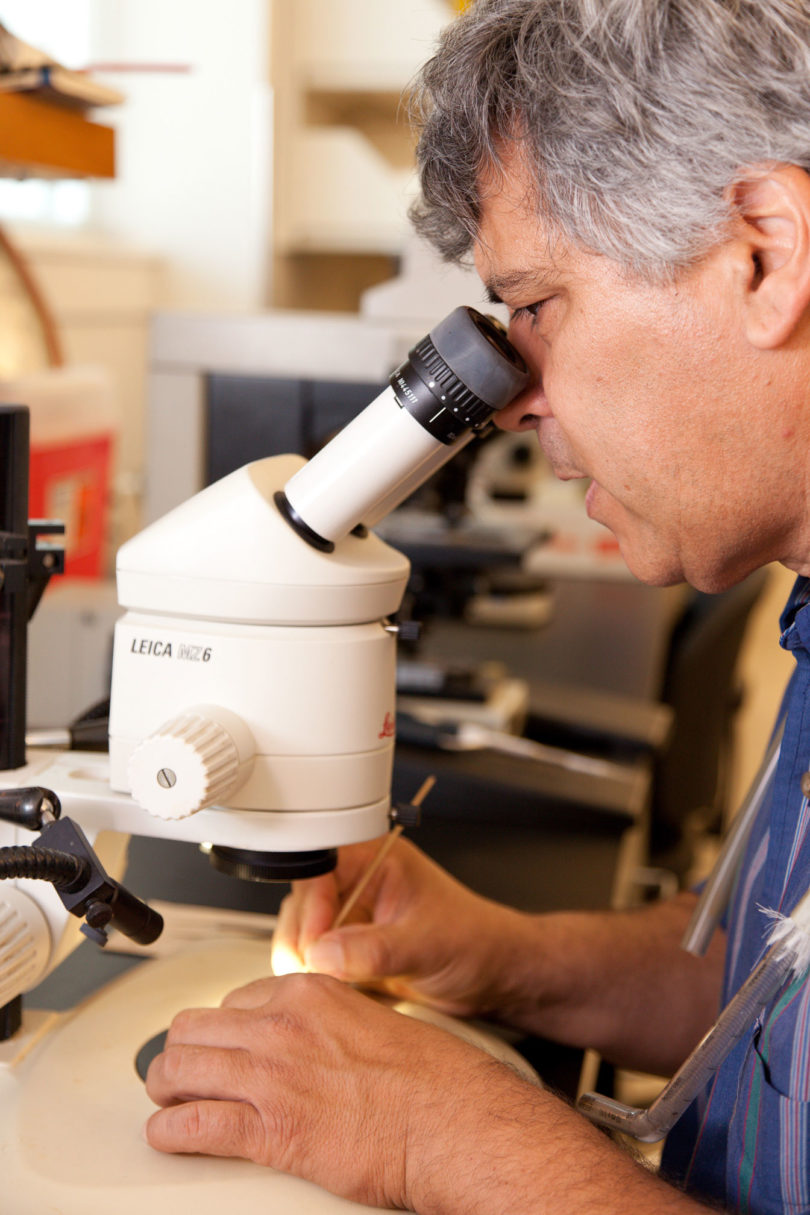 Athens, Ga. – Black flies drink blood and spread disease such as river blindness-creating misery with their presence. A University of Georgia study, however, proves that the pesky insects can be useful.

Don Champagne, an entomology professor with the UGA College of Agricultural and Environmental Sciences, discovered a way to use the black fly’s blood-sucking tactics for medical advancement. The results of his research were published in the journal PLoS One.

“In order to feed on blood, these insects have to contend with our natural defense agents against blood loss-like clotting,” Champagne said. “Many insects use salivary injections packed with proteins to inhibit the enzymes in our bodies from reacting the way they normally would to injury.”

In order for insects to earn a blood meal, they have to override the human body’s battery of defenses. Most of these insects have anticoagulants to fight off clotting, inhibitors to stop clumping of platelets and vasodilators to speed up blood flow at the bite site.

A few years ago, Champagne worked on a study transcribing the messenger RNA that codes for proteins found in the salivary secretions of the black fly. He found two proteins that looked like they could hinder clotting. Champagne determined that one of these inhibits the clotting cascade by blocking factor Xa. Clotting factors exist in the blood in an inactive state, waiting to be called into action. Because these factors work like dominos, if factor X fails to be turned on (converted to Xa) the rest of the responses stay inactivate.

“We were able to show that the salivary protein targets Xa and is a good inhibitor of clotting,” he said about his recent research. “But, it is an even better inhibitor of some enzymes involved in very early immune response-elastase and cathepsin G.”

These enzymes are able to kill bacteria, and they help drive the inflammatory response.

“We were expecting these to be anticoagulants, that wasn’t a surprise,” he said. “But, we were surprised to learn that the protein affected all of these other responses.”

This discovery made the protein attractive as a potential drug target, possibly one to treat patients recovering from heart attacks.

“Inflammation is a major source of tissue damage associated with vascular injuries,” he said. “The idea of a single factor that could both inhibit clotting and inhibit damaging inflammation responses at the same time is pretty novel and interesting.”

Studying black flies is easier at UGA than anywhere else, because UGA has the only black fly colony in the world. The flies in the lab aren’t the same ones that transmit the debilitating river blindness disease, but the unique resource enables important research about the transmission of river blindness.

“We are not rearing black fly vectors; they are not being infected with the parasite that causes river blindness; and there is no risk to the public,” he said.

What they are doing is learning more about how the disease is transmitted and how to possibly stop it.

“A lot of blood feeders also vector diseases,” Champagne said. “When they are playing all of these tricks on the host in order for them to get a good blood meal, they change the conditions at the point where these pathogens go into the skin. Those changes often favor the pathogen. In an environment where normal wounding responses and defenses are inhibited, the pathogen can go in and say ‘oh, look at that-the door is wide open.”

Black flies vector river blindness while drinking their blood meal. A threat in sub-Saharan Africa, river blindness is a parasitic disease caused by a nematode infection. It’s not caused by nematodes themselves. A symbiont that the nematode releases when it dies triggers an inflammatory response that causes changes in the skin and chronic inflammation. Eventually, the symbionts migrate through the eyes, causing the cornea and lens to cloud and leave infected people blind.

“These salivary factors change the environment for the parasite so it’s conceivable that knowing about this protein would allow us to target it in some way, maybe by vaccinating against it, and that would likely make it less favorable for the transmission of river blindness,” he said.