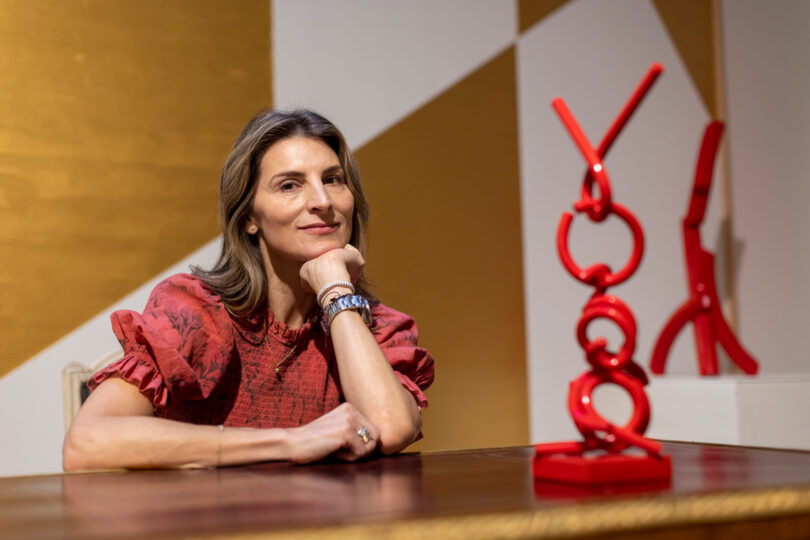 Blair Voltz Clarke runs an internationally regarded art advisory business in New York City, and is the owner of Voltz Clarke Gallery. She is also a noted collector herself. The desk in her office, shown here, was once owned by Gianni Versace. (Photo by Peter Frey/UGA)

In November, during COVID’s pre-Omicron lull, Clarke opened the doors to her Manhattan apartment and invited in more than 40 UGA alumni and guests. For a community starved for in-person gatherings, it was like a massive wall had come tumbling down. And Clarke, gliding from conversation to conversation, made sure every guest felt welcome. Her energy lit up the room. 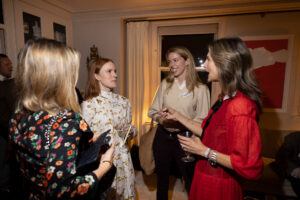 Blair Clarke has a gift for networking, and she glided from one conversation to the other at an alumni event she hosted in her New York apartment. (Photo by Peter Frey/UGA)

For 20 years, Clarke has run an art advisory business in New York; six years ago she opened Voltz Clarke Gallery, which has been home to a rotating display of the more than 20 artists she represents. Many of those artists’ pieces adorn the walls of the apartment Clarke shares with her husband, Alistair, and their two daughters.

Clarke’s love for the University of Georgia is palpable, but her party was the first time she’d ever participated in a university event in New York.

It won’t be her last.

A Matter of Trust

“I always start by saying, ‘take your time.’”

Clarke ABJ ’94 majored in advertising in the Grady College of Journalism and Mass Communication and minored in art history. She credits her UGA education for giving her the foundation to build an internationally known and respected business.

“We are very excited to sell you artwork and get you started on a lifelong mission to collect. But it’s important to live with pieces for a while and not rush,” she says, scripting a sample conversation with a prospective client. While her job title in the gallery is art advisor, the day-to-day is really that of an agent.

“If you do fill a home based on fabric samples and wall colors and you do it in two weeks, most likely you’ve made a lot of mistakes.”

After graduating from UGA, Clarke got a job at a gallery in Atlanta and learned a lot about being a big fish in a small pond. In 1999, she was ready to be a small fish in a big pond and moved to New York.

“Being young and fearless is truly the best formula,” she says. “This was before social media. I wasn’t scared to pick up the phone and call anyone. You had to get out there and prove yourself. It was pure grit and pure determination, I tell my girls. You have to start over and reinvent every day.”

Soon, she found a niche that welcomed constant reinvention.

The concept of a roving art gallery—a pop-up—is popular now. But Clarke pioneered the idea in the early 2000s.

Without a set address, artists and gallery owners save a lot of money on rent and other expenses. Perhaps the only thing that’s concrete is the buzz.

“It’s a gallery without the physical walls,” she says. “It was always an adventure about where the next pop-up would be.”

For instance, after learning that the high-end fashion line Salvatore Ferragamo was opening a gallery space in its flagship 5th Avenue store, Clarke cold-called them and ended up curating exhibitions for the next two years.

She launched pop-ups in other fashion houses, restaurants, and hotel lobbies. The more unexpected the place, the more exciting the show. Still, with that excitement comes the eventual, inevitable exhaustion. And as the artists became more popular, the desire to settle down grew.

“They wanted a home base,” Clarke says. “The artists were gaining momentum and their reputations were rising, but when their great uncle came to town, there wasn’t a place where they could see their art.”

At that time, Clarke’s husband, Alistair, was looking to step away after 30 years with the auction houses Christie’s and Sotheby’s. If she opened a gallery space, he offered to do the books, which would free her to work on the client and artist sides. The new setup worked, and in 2015, they opened a gallery space at East 62nd and Lexington Avenue. In 2020, they moved to a new space on the Lower East Side.

The COVID-19 pandemic may have made the space’s launch complicated. But it also opened other opportunities.

“The pandemic has taught us that there is a lot you can do online and still feel authentic,” Clarke says.

She has FaceTimed with clients from Los Angeles and Atlanta, as well as artists working in France. And she has taken part in online panels over Zoom, including some hosted by the Lamar Dodd School of Art. These types of interactions will be ongoing, Clarke says.

“It feeds the soul. It is really meaningful. Getting on a plane is still extremely important, but you can add to your roster right from your desk. It makes us work to be the best we can be because there is a lot of competition in this city.”

The post-lockdown phase of the pandemic has given Voltz Clarke Gallery new life. It’s a strip of various art walks, which bring a decent amount of foot traffic. Clarke has also taken the concept of pop-ups in new directions.

Clarke’s meet-and-greet and her Zoom appearances are just the beginning of her reacquaintance with UGA. In 2020, she joined the School of Art’s board of advisors. Her first in-person meeting will be in April. In the meantime, she has been working overtime for UGA.

Last summer, the Voltz Clarke Gallery show, In Her World included a piece by alumna Christina Foard MFA ’20. Later this spring, Clarke will host a group of art students for a weeklong mini-mester, which will feature a reception in the gallery, meetings with New York artists, and possible internship opportunities.

“The University of Georgia is attracting students from all over the world,” she says. “The shows they are mounting in Athens could be in the Guggenheim or MoMA. We are opening this connection between the whole New York art world directly to Athens in a very easy, organic, casual way. But it’s all very serious.

“I cannot be more excited and honored to be a part of it.”