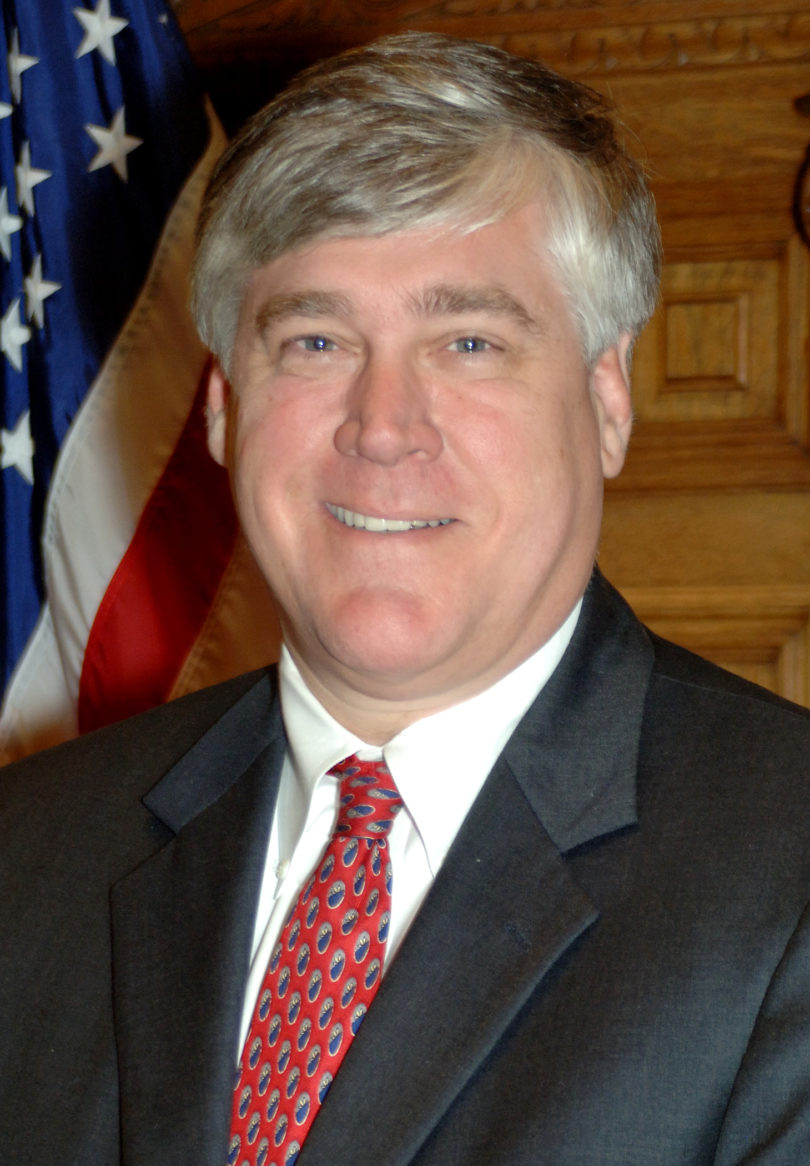 Athens, Ga. – The University of Georgia will honor five individuals at its annual Tucker Dorsey Blue Key Alumni Banquet Friday, Nov. 6, at the UGA Center for Continuing Education. A reception will begin at 6:30 p.m. with the dinner and program to follow at 7:30 p.m.

Bill Cowsert
Cowsert was elected to the Georgia Senate in 2006 and was elected senate majority leader in 2014. He represents the citizens of Clarke, Oconee and Walton counties in the 46th District. He serves on the Senate appropriations, finance, health and human services, judiciary, reapportionment and redistricting, regulated industries and utilities and rules committees.

Born in Jackson, Mississippi, and raised in Macon, Cowsert graduated from Macon Central High School. He earned a bachelor’s degree in business administration from Presbyterian College and is a 1983 graduate of UGA’s School of Law.

Terry England
England represents the 116th District in the state House of Representatives, which includes most of Barrow County and its municipalities. He was first elected to the House in 2004. Since 2011, he has served as chair of the House Appropriations Committee.

A 1984 graduate of Winder-Barrow High School, England attended UGA, majoring in agricultural engineering. He has spent his working life as a farmer and agribusinessman. He and his wife, Cindy, live on a farm that has been in England’s family for 150 years. His businesses have included Pete’s Little Idaho Tater Farm and the Homeport Farm Mart.

England is currently president and CEO of Pete’s Enterprises Inc., which provides consulting in marketing, hiring practices, workplace safety and food safety for the construction and agribusiness industries.

In 2003, England served as chair of the board of the Barrow County Chamber of Commerce. He was a board member for six years and served on various committees for 15 years. The organization honored him with its Presidential Award and, in 2013, named him Citizen of the Year.

Jones has offered his time and leadership to numerous academic, community, legal and social organizations. He is a managing trustee and secretary for the UGA Foundation and is a member of the UGA Athletic Association board. He is the former chair of the Georgia Judicial Qualifications Commission, the UGA School of Law’s Board of Visitors and the Athens Area Community Foundation. He also served on the Georgia Supreme Court’s Commission on Equality and Domestic Violence Committee.

Jones has won many awards for his judicial and community service, including the UGA School of Law’s Distinguished Service Scroll Award, UGA’s Fulfilling the Dream Award and the State Bar/YLD Judicial Service Award, among others.

Jones earned his bachelor’s degree in 1978 and his Juris Doctor in 1987 from UGA.

Peter Shedd
Shedd received a bachelor’s degree in 1974 and a Juris Doctor in 1977 from UGA, after which he clerked for Anthony Alaimo, then the chief judge of the U.S. District Court for the Southern District of Georgia.

In 1978, Shedd returned to UGA as a Terry College of Business faculty member. At UGA, he served as an associate dean, executive assistant to the president and interim vice president for instruction. He also directed the education and training program of the Consortium on Conflict Resolution and Negotiation and served as faculty director of the executive leadership program within the Georgia Leadership Institute.

Shedd was among a group of Terry faculty responsible for implementing the college’s first executive MBA program. Prior to his retirement in 2009, he served as director of Terry’s full-time MBA program. As a University Professor Emeritus of Legal Studies, he continues to teach in Terry’s executive and professional MBA programs.

The Council for the Advancement and Support of Education named Shedd its Georgia Professor of the Year in 1993. He is also a Josiah Meigs Distinguished Teaching Professor. From 1987 to 2007, he served as faculty adviser to UGA’s chapter of the Blue Key National Honor Society.

Tricia Chastain
On Jan 12, Chastain assumed her new role as president of the Georgia Student Finance Commission, an appointment given by Gov. Nathan Deal. GSFC administers the state’s scholarship, grant and loan programs.

Prior to joining GSFC, Chastain was the associate vice president for government relations at UGA. In this role, she was responsible for managing the university’s relationships with the governor’s office, the General Assembly, the board of regents and statewide elected and appointed officials.

Chastain began her career in government working in the office of U.S. Sen. Johnny Isakson when he was a member of the U.S. House of Representatives. She held a variety of positions for Isakson over 11 years and, from 2007-2011, served as Isakson’s state director.

For more information on the UGA chapter of the Blue Key Honor Society, see http://bluekey.uga.edu/.