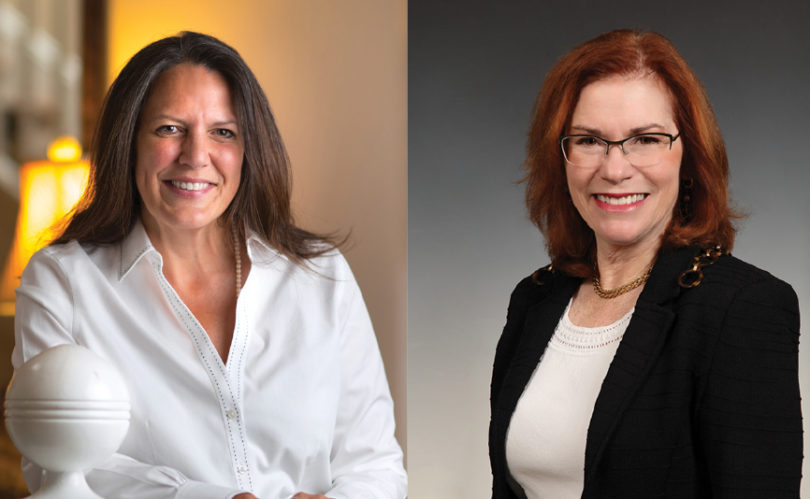 Connie Ledoux Book PhD '93 (left) and Garnett Stokes MS '80, PhD '82 were each installed as the new presidents of Elon University and the University of New Mexico, respectively, on March 1. They are their schools first female presidents and each blazed interesting trails on the way to their new offices. (Photo by Catmax Photography (Book) and Special (Stokes))

March 1 was a big day for a pair of universities on opposite sides of the country. On that day, the University of New Mexico, in Albuquerque, and Elon University, near Burlington, North Carolina, installed new presidents. UNM’s Garnett Stokes (above, right) and Elon’s Connie Ledoux Book are the first women to hold the offices, and both are UGA alumnae.

The trailblazing significance of their positions is not lost on either new president. Stokes MS ’80, PhD ’82 says she understands the responsibility of being a first and is motivated by the community’s excitement. For Book PhD ’93, breaking ground and its effect on others is something she’s experienced before.

In fall 2015, Book became the first woman provost at The Citadel. Part of the process included a fitting for her uniform, which needed to be custom made. Prior to the fitting, Book learned that the head seamstress, Eartha Brown, had recently lost her nephew Tywanza Sanders in the most tragic manner. He was the youngest of the parishioners murdered by Dylann Roof at Charleston’s Emanuel African Methodist Episcopal Church just weeks earlier.

Upon meeting Brown, Book offered her condolences and added that it often must feel like nothing is ever going to change.

“Well, General Book,” Brown responded. Academic and administrative titles at The Citadel are paired with military ones. Only the president and provost are identified as generals. “Just when I think things won’t change, here I am measuring the first woman to be a general at The Citadel.”

“I could see how much pride she had in that moment and how much it meant to her,” Book says. “That’s what being a first is. Women across all generations and experiences can see it, and that gives way to new thinking about future opportunities for all women.”

Stokes is no stranger to firsts either. After earning master’s and doctoral degrees at UGA in industrial/organizational psychology, Stokes joined the faculty of the Department of Psychology, eventually becoming department head. In 2004, Stokes was named the first woman dean of the Franklin College of Arts and Sciences, a post she held for seven years. She then moved on to Florida State University, where she became that university’s first woman provost and interim president. Immediately prior to her move to UNM, Stokes was provost and interim chancellor at the University of Missouri.

Issues of diversity have long been one of Stokes’ administrative focuses. While Franklin’s dean, she instituted the college’s first diversity and climate inclusion survey; more recently, she led FSU’s Diversity and Inclusion Council. That experience makes her an ideal match for UNM, an institution whose undergraduate population is majority Hispanic.

“That resonated with me,” Stokes says. “I’ve had a career where issues of diversity and inclusion are important, and because of its diversity, UNM is a university that could lead the nation in this area.”

Stokes first visited New Mexico as a UGA faculty member and fell in love. Now as the leader of the state’s first public university, she is touring New Mexico again. She is meeting with a variety of constituents, including representatives from several of the state’s Native American tribes, another significant UNM student population.

Book, too, has spent the summer introducing herself to Elon supporters—and in some cases reintroducing herself. She spent nearly 15 years as an Elon faculty member and administrator before moving to The Citadel. In fact, she is now in charge of implementing a strategic plan she helped write.

“I’m excited to be back,” says Book, who worked as a TV reporter before earning her doctorate in journalism at UGA. She is quick to credit former Grady professors including Jim Fletcher, Bill Lee, and Barry Sherman for helping to prepare her for a career in academia. “It feels like every step of my career has prepared me for this opportunity, and I’m making sure I talk to people to understand what they value most about this institution we all hold in such high regard.”