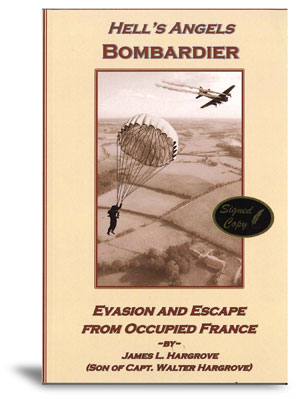 Hell’s Angels Bombardier: Evasion and Escape from Occupied France is the memoir of Lt. Walter Hargrove, who served in World War II as bombardier on the famous B-17 bomber, Hell’s Angels, in the 303rd Bombardment Group based at Molesworth, England.

Now that classified escape and evasion reports have been released, it is possible to tell the story as it happened. In addition, recent research has identified names of French resistance workers in the escape networks and revealed the personnel in British special operations who rescued downed aviators from the coast of Brittany.

Written by James L. Hargrove, Hell’s Angels Bombardier provides a personal perspective that is lacking in the dry, military accounts of movements of men and war material, and it adds previously unpublished documents and narratives that greatly enhance the hair-raising sense of adventure.

James Hargrove is a former UGA professor who retired in 2012.