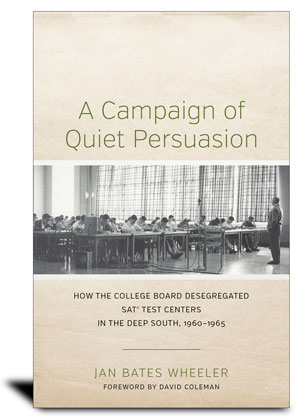 In 1960, the College Entrance Examination Board became a participant in the movement to desegregate education in the South.

Working with its partner, Educational Testing Services, the College Board integrated its Scholastic Aptitude Test centers over a five-year period.

Shedding light on this story for the first time in her book, A Campaign of Quiet Persuasion, Jan Bates Wheeler, associate director for accreditation in the Office of Academic Planning, tells how two College Board staff members-Ben Cameron and Ben Gibson-succeeded. The pair accepted the personal danger involved in confrontations with racist school officials, but the officials who cooperated with them assumed even greater risk.

To minimize the threat to those who supported desegregation, Cameron and Gibson pledged not to publicize their efforts. Their concerns, according to Wheeler, kept this remarkable story largely untold until now.