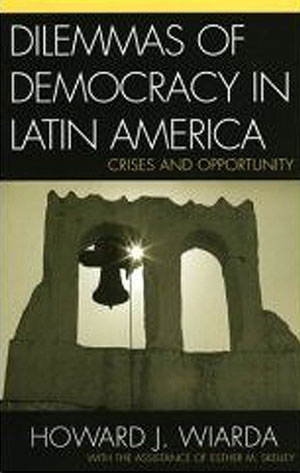 Dilemmas of Democracy in Latin America
By Howard J. Wiarda
Rowman and Littlefield
$27.95

Democracy is in big trouble in Latin America, and so is U.S. policy there, according to Howard J. Wiarda, Dean Rusk Professor of International Relations and head of UGA’s international affairs department.

In his book Dilemmas of Democracy in Latin America: Crises and Opportunity, Wiarda details the decline of public support for democracy after the “third wave” transitions to democracy in the 1980s and 1990s. The book also examines public opinion surveys that show almost half of Latin Americans prefer “strong government,” which Wiarda suggests may be another word for authoritarianism.

One result of these situations, according to Wiarda, is that U.S. policy toward Latin America has returned-as it did often in the past-to benign neglect, which turns out to be not so benign. All the democratic gains in Latin America of the past two decades seem threatened. Worse, no one in Latin America or the U.S. has any viable alternatives or solutions to the present malaise.

In exploring why democracy is in such big trouble in Latin America, and why U.S. policy in the area so often goes astray, Wiarda argues that Latin America was founded on such a different basis than the U.S. and has such a different history, political culture and sociology that it cannot possibly imitate the U.S. model of democracy.