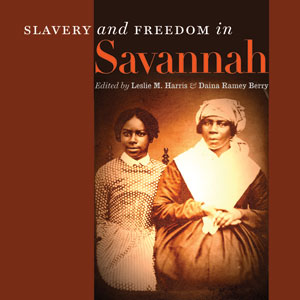 In Slavery and Freedom in Savannah, editors Leslie Harris and Daina Ramey Berry have collected perspectives on slavery, emancipation and black life in Savannah. Published by the UGA Press, the volume includes a mix of longer thematic essays and shorter sidebars focusing on individual people, events and places.

The story of slavery in Savannah may seem to be an outlier, given how strongly most people associate slavery with rural plantations. But as Harris, Berry and the other contributors point out, urban slavery was instrumental to the slave-based economy of North America. Ports served as both an entry point for slaves and as a point of departure for goods produced by slave labor in the hinterlands.

Moreover, the system of slavery as experienced by African-Americans and enforced by whites influenced the very shape of the city. Slavery and Freedom in Savannah restores the urban African-American population and the urban context of slavery, Civil War and emancipation to its rightful place.