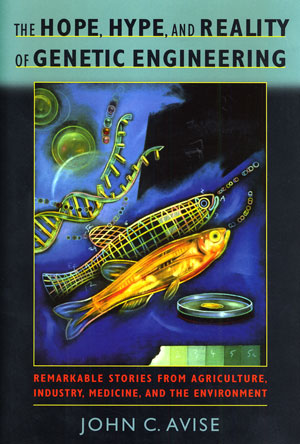 In The Hope, Hype, and Reality of Genetic Engineering, John Avise, UGA professor of genetics, takes readers on an introductory tour into the stranger-than-fiction world of genetic engineering.

Eager researchers are intent on fashioning a prodigious medley of genetically modified organisms to serve human needs. By swapping genes among many forms of life-humans included-scientists are trying to creating such implausible outcomes as: wild rabbits engineered for self-contraception and genetically modified bacteria engineered to detect hidden landmines. Intended for a general audience of professional biologists, an interested public, and ­university students of both the humanities and the sciences, this book uses simple but evocative language to explain the histories, techniques, goals, successes and failures of more than 50 of the most compelling stories in genetic engineering.

This book is for readers who want to know more about the transgenic items on their dinner table, how barnyard animals are cloned for pharmaceuticals and foods, how wild creatures from mosquitoes to endangered species are being genetically modified and what genetic engineering holds for the future of medicine and the human species.