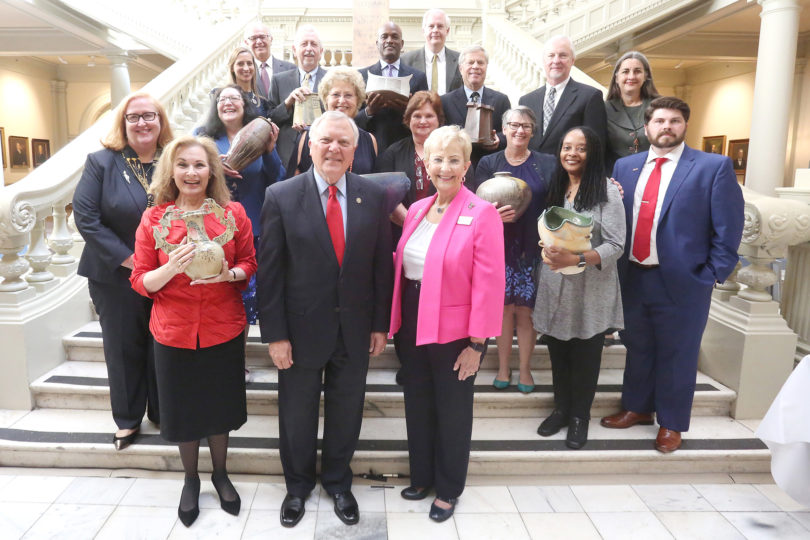 Winners of the Governor's Award for the Arts and Humanities from given out by Gov. Nathan Deal and first lady Sandra Deal include UGA's Valerie Boyd, the Charlayne Hunter-Gault Distinguished Writer in Residence and an associate professor of journalism, and William U. Eiland, director of the Georgia Museum of Art.

Valerie Boyd, the Charlayne Hunter-Gault Distinguished Writer in Residence and an associate professor of journalism, and William U. Eiland, director of the Georgia Museum of Art at the University of Georgia, each received a Governor’s Award for the Arts and Humanities from Gov. Nathan Deal and first lady Sandra Deal.

The sixth annual awards were presented in a ceremony at the Georgia Capitol on Oct. 4. The awards are a partnership with the Georgia Council for the Arts and Georgia Humanities.

“The first lady and I are longtime supporters of the arts, humanities and expressions of creativity,” Deal said. “These awards recognize outstanding individuals and organizations that have made significant contributions to Georgia’s economic, civic and cultural vitality. Our state’s creative industries provide some 200,000 jobs for Georgians and generate $62.5 billion in economic impact. I congratulate the individuals and institutions being honored today and am grateful for their contributions to communities throughout Georgia.”

Boyd’s nomination biography said that “her passion for story inspired emerging writers to find their voice and develop their craft,” and “she animates the writing life, rousing her students’ creativity and zeal for truth by her own example.”

Boyd was introduced at the ceremony by friend and former student Monica Pearson. Pearson spoke of Boyd as a “history maker in the state and around the world” through writing books including “Wrapped in Rainbows: The Life of Zora Neale Hurton,” and her upcoming book, “Gathering Blossoms Under Fire,” a curation of the journals of Alice Walker.

When “Wrapped in Rainbows” was released, the Georgia Center for the Book included it in a list of “25 books that all Georgians should read.”

In addition to her writing, Boyd was celebrated for her contributions to educating future writers, including her role as co-director of the Master of Fine Arts Program in Narrative Media Writing.

During her comments, Pearson cited a nomination letter written by Alice Walker to Deal.

“Talking with her is akin to standing before a mirror,” Walker said in her nomination letter, “but, one that shows not only yourself, but all the surrounding possibilities as she dives straight for the heart of the image and view.”

Prior to teaching, Boyd spent nearly 20 years writing for the Atlanta Journal Constitution, including time as the arts editor.

Eiland has been director of the museum since 1992, during which time its permanent collection has tripled in size and it has both moved to a new facility on UGA’s East Campus and then expanded that facility. Instead of relying on state funds, Eiland has made fundraising an integral part of the operations of the museum, enabling its growth during his tenure even during tough economic times. The museum’s present facility, built in two phases, was paid for completely by money raised from external sources.

Eiland is perhaps even better known outside of Georgia than within it, due to his participation at a high level in many peer and professional groups, such as his service as a site visitor for the American Alliance of Museums accreditation program. In addition, he has consistently kept in mind the museum’s role as the official state museum of art, striving to keep admission free and developing outreach programs that span the state.

Linda Chesnut and Peggy Galis of the museum’s Decorative Arts Advisory Committee wrote in their nomination letter, “His welcoming spirit has opened [the museum] to all ages, all races, ALL Georgians,” and referred him as a “franchise player” for the state of Georgia.