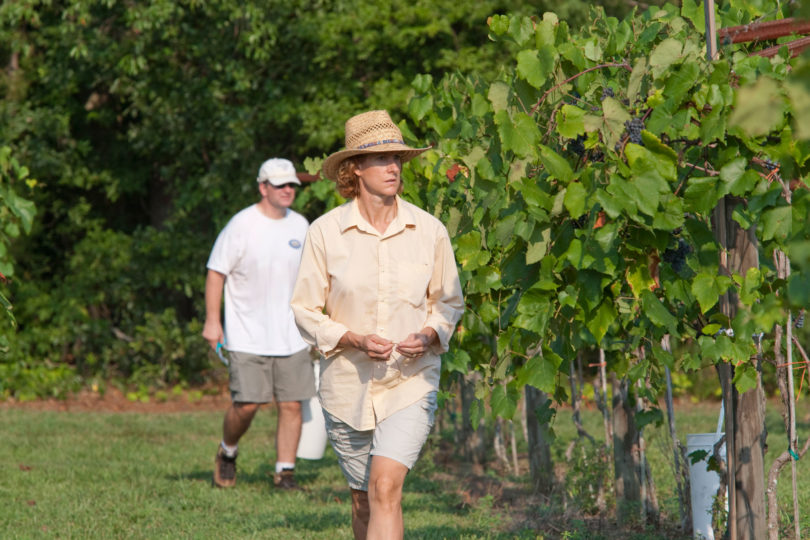 Shelley Cannady and her husband

Shelley Cannady wants help. For years now the assistant professor in College of Environment and Design has been growing grapes for the North Georgia wine market. The vineyard she’s built at her Madison County farm stretches for 2.3 acres, producing a harvest of dark blue Cynthiana grapes from more than 1,300 vines. This season she brought in just more than one ton of grapes, which were sold to a local winery and will hit the shelves in about three years as a local red wine. But her original plans have withered on the vine.

“When I first started this venture, the picture actually included a big winery on the property. But now that’s just not going to happen,” she said. “For one thing, it’s not profitable unless you have about at least 10 acres in vines. So if it’s not going to be profitable for me, I’d like for some further good to come out of the vineyard—for it to have some purpose other than selling the product. And I’m open to collaborations.”

Since she began the project, Cannady has received tenure at UGA and turned her attention to other projects on the farm, leaving little time available to expand her vineyard. She hopes professors or graduate students can use the vineyard as an instructional aid or research resource. She can see it being useful for research in ­agriculture, ecology, entomology, or environmental design. She’s even open to giving up commercial production in the vineyard altogether.

“At this point, I’m honestly not opposed to turning it into wildlife habitat, especially for birds, who really seem to enjoy it as both habitat and a food source. My only problem would be one of aesthetics,” she said.  “If it’s not maintained for production, it may quickly become a weedy jungle.”

The north Georgia wine industry is growing and is a boon to the state’s efforts to expand agritourism. Georgia already boasts a number of vineyards and wineries at higher elevations, according to Cannady.

“The regular varietals that we’re all used to drinking like chardonnay, pinot noir and other vitis vinifera, the standard European wine grapes, don’t thrive at our elevation,” she said. “Below 1,200 feet they’re susceptible to Pierce’s disease, whose vector is the glassy-winged sharpshooter insect. So at my farm’s elevation I had to find another kind of grape, which is why I chose to plant Cynthiana (vitis aestivalis), an Ozark native becoming more popular in the wine industry.”

For Cannady, a native of California wine country, the vineyard began as a project—not a career.

“I’m interested in wine as an agricultural product, supporting the local food movement, and growing a good product,” she said.  “But I’m also interested now in exploring a new purpose for the vineyard, focusing on research or habitat rather than profit.”