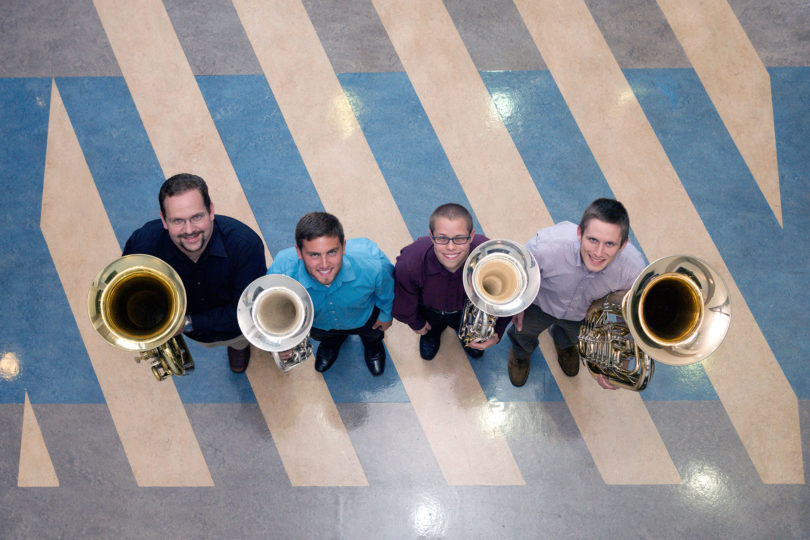 “This event is one of the most competitive for tuba-euph players in the world,” said Wildman, who also took first prize in Austria this summer at the International Tuba and Euphonium Conference.

Though the analogy may sound like an overstatement, David Zerkel, professor of tuba and euphonium, concurred with Wildman’s assessment.

“I don’t think that the comparison to an Olympic medal would be out of line at all,” he said. “Placing in any competition that is international in scope is an indicator that you’re at the top of your game, compared to anyone in the world at the same station of their career. It is extraordinarily gratifying to see that what we have built here get recognized for excellence at the profession’s highest level.”

Wildman wasn’t the only UGA student to stand atop a musical podium at the Falcone Festival. Students from Hodgson School of Music occupied four of six artist division finals positions.  David McLemore and Wildman respectively claimed the top two prizes in the tuba artist category. Gary Garvin and Alex Avila—who play the tuba’s lesser-known cousin, the euphonium—placed second and third in the euphonium artist category.

Zerkel said he hopes the visibility of his students’ accomplishments will help correct some of the misconceptions held about their instruments “…the pejorative image of the gleaming, metal leviathans sequestered in the back of the concert hall, groaning out simple basslines and existing only to provide musical support to the rest of the band. The reality is that a tuba is no less nimble than any other instrument.

“I wish we could erase the stereotype that, somehow, less should be expected of our community as musicians,” Zerkel also said. “My students aren’t just good euphonium and tuba players; they are great musicians who just happen to play these instruments.”

Named in honor of Leonard Falcone, euphoniumist and former director of bands at Michigan State University, the Falcone Festival has awarded almost $200,000 in prize money since its inception in 1986. The four-day event is held each summer at Blue Lake Fine Arts Camp and consistently draws contestants from around the world.

This year, the competition hosted 162 entrants over four professional and student divisions.  Zerkel—or “DZ” as his students affectionately refer to him—has sent 10 students to the Falcone Festival since his arrival at UGA in 2000.

“DZ is an amazing teacher in both his knowledge of the instruments and his delivery of excellent musical advice,” Avila said. “I foresee UGA continuing to be a tuba-euph hot spot because Zerkel is an outstanding musician and person.”

Prior to his appointment at UGA, Zerkel taught in a similar capacity at Illinois State University.  A former member of Washington, D.C.’s U.S. Army Field Band and the U.S. Army Band, Zerkel also has appeared with the Philadelphia Orchestra, Chicago Symphony Orchestra, Atlanta Symphony Orchestra, National Symphony Orchestra, Baltimore Symphony Orchestra and the Kennedy Center Opera House Orchestra. He is a past president of the International Tuba Euphonium Association and today divides his time between teaching and performing, including regular engagements with the Brass Band of Battle Creek, an elite ensemble comprised of the world’s top brass musicians.