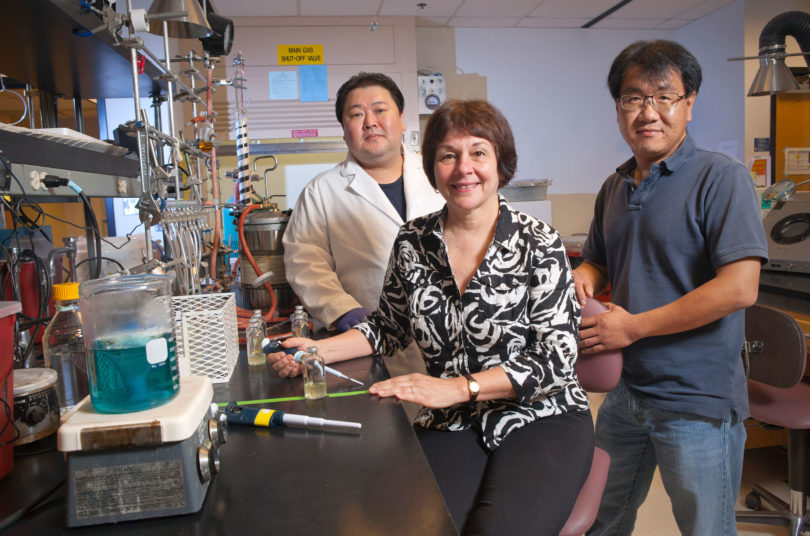 The single most important barrier to the use of lignocellulosic biomass such as switchgrass, populus, sorghum and miscanthus for production of biofuels is the resistant nature of the biomass itself. The problem lies in the conversion or degradation of complex biomass to make products of interest.

New research from UGA scientists who are members of the Department of Energy’s BioEnergy Science Center or BESC provides a genetic method for manipulating a group of organisms, called Caldicellulosiruptor, that have the ability to use biomass directly at temperatures over 160 degrees Fahrenheit. The ability to modify the microbes to make the needed fuel products is a required first step for modern industrial fermentations. This allows researchers to combine the natural ability to consume renewable plant materials with an altered, improved ability to make what is needed.

“The most formidable barrier to the use of biomass, such as switchgrass, to biofuels is the ability to break down the biomass. Plants have evolved over millions of years to resist degradation by microbes, and that is exactly what we want to do,” said Janet Westpheling, a microbial geneticist in the department of genetics in the Franklin College of Arts and Sciences and a scientist of BESC. “The ability to manipulate the genetics of organisms that can use biomass directly is essential to making them useful. We began with a group of bacteria that can use biomass for growth and will use genetics to teach them to make ethanol.”

Westpheling and her colleagues developed the first DNA transformation methods for Caldicellulosiruptor, a group of thermophilic anaerobic bacteria that can utilize biomass directly. The discovery uses enzymes unique to these bacteria to overcome a defense mechanism they use to protect themselves from invading viruses. The novelty of their discovery is a previously unknown methyltransferase, an enzyme that transfers a methyl group from a donor to an acceptor apparently unique to this species, capable of modifying the DNA, protecting it and allowing transformation. The results of the study were recently published in the journal PLOS ONE.

“We had clues that restriction (degradation) of DNA by the organisms themselves was a barrier to DNA transformation, but this is the first time it has been shown to be an absolute barrier,” she said.

Paul Gilna, the director of the BioEnergy Science Center headquartered at Oak Ridge National Laboratory, adds, “The work of Dr. Westpheling and her team at UGA to develop these genetic tools is a real breakthrough for BESC that will open the way to allow us to further develop the Caldicellulosiruptor bacteria as a new platform for the efficient conversion of lignocellulosic biomass into fuels.”

Simplifying the process of converting biomass into fuel helps to make cellulosic biofuels cost competitive with gasoline. In 2010, worldwide biofuel production reached 28 billion gallons, 7 billion were created in the U.S. Biofuels account for about 3 percent of the fuels used for road transportation. According to the DOE, ethanol produced from cellulosic materials has the potential to cut lifecycle greenhouse gas emissions by up to 86 percent relative to gasoline.

And once a microbe can be reliably redesigned to make one desired product like bioethanol from biomass, the same techniques can be used to make other fuels and chemicals that are currently derived from petroleum from biomass such as bioplastics.