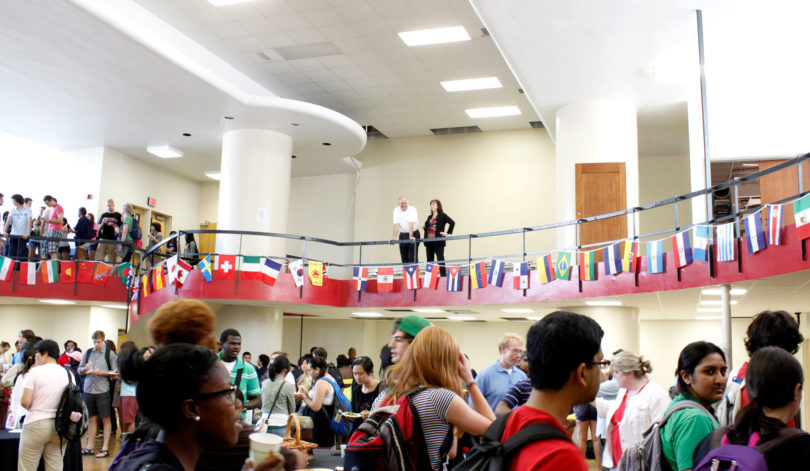 Held weekly during fall and spring semesters from 11:30 a.m.-1:30 p.m. in the Ballroom of Memorial Hall, International Coffee Hour showcases different cultures, music and food as well as gives faculty, staff, students and the community a chance to get together.

“Wow, this is amazing.” That was Parate’s first impression of coffee hour. An application programmer in EITS, Parate has been going to the event for six years now. Because it’s not often that he can take the 24-hour flight back to his family in India, coffee hour is his “home away from home,” where he feels comfortable around people who share experiences with him.

Approximately 300 people show up for the weekly event that fills both floors of the ballroom. Students chat on the staircase, mingle with administrators, look at diversity displays, get a lunchtime snack and have a chance to practice language skills with students from around the world. The line for the event can spill out into the hall, and the crowd can be heard from the front of the building.

International Coffee Hour is celebrating 40 years of multicultural weekly programs with a reception Sept. 21 from 11:30 a.m.-1:30 p.m. in the Memorial Hall Ballroom.

The anniversary event will include international teas and food from around the world: beans and rice, sushi, pasta, coffee from Africa and Southern desserts. The African Student Union is organizing a global fashion show.  Members of the UGA Breakdance Club will perform.  There also will be a steel drum soloist, an Argentinean dance exposition and an Iranian santur performance.

The program has been around since 1972 when Richard Reiff, former executive director of the Office of International Education at UGA, learned that international students weren’t meeting many Americans and were a bit isolated from the rest of campus. He then founded a number of programs—including coffee hour—geared towards bringing international students and the university community together.

The very first coffee hour had about 25 people in attendance. It has since grown to 300-400 people every week, or about  9,000 people annually. And excluding brief relocations and renovations, the event has been held exclusively in the Memorial Hall Ballroom.

“International Coffee Hour is one of the longest-running programs of its kind in the country,” said Leigh Poole, associate director of student life, who has been going to coffee hour since 2000. She tries her best to go ever week, even if it’s just for a few minutes.

“It’s a great way to check in with students, see how they’re doing, how classes are going, see what issues,or concerns they have,” Poole said.

And coffee hour is more than just coffee. It’s international food and activities.

Recreational Sports hosted the first coffee hour of this semester. The ballroom was decorated in kayaks. There was information about the programs the unit offers, including yoga and martial arts demonstrations. The food was healthy fare that included fruit.

And while the free food is a draw, it’s only one of the many reasons for faculty, staff and students to attend.

Charlotte Garvin, a senior from Roswell, has been coming to International Coffee Hour since she was a freshman. A Japanese and linguistics major, she said the event gives her a chance to practice her pronunciation with Japanese students.

Ashley Fuller, an administrative assistant in the Franklin College of Arts and Sciences, has been coming to the event for eight years. She started coming because she wanted to hear Indian music, but kept coming because of interesting shows and the people she met.

“It really opens you up to other parts of the world,” she said.