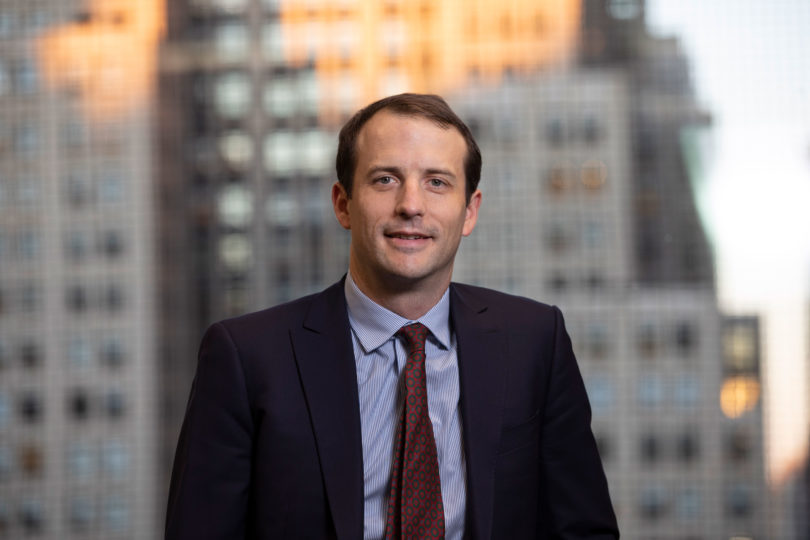 Brian Quinif AB '06, MA '06 is a vice president at HSBC in New York. IN part because of his fluency in Spanish and Portuguese, he works as a trader for the Latin American market. (Photo by Peter Frey/UGA)

Thomasville native Brian Quinif says it was a big move for him when he came to Athens to attend the University of Georgia. He didn’t know it at the time, but there would be much larger ones to come.

Even though Quinif came to UGA a year early, he wasn’t intimidated by college work. In fact, as an underclassman he earned a Foundation Fellowship, the university’s foremost scholarship, which set him up for a journey that filled his passport with stamps.

Quinif studied abroad in Innsbruck, Austria. He had an internship in Barcelona and another study abroad trip in Rio de Janeiro. Those latter two experiences helped him acquire fluency in both Spanish and Portuguese. Further study at the London School of Economics honed his business acumen. By the time Quinif AB ’06, MA ’06 was finished, he was able to graduate with bachelor’s and master’s degrees in economics (he double-majored in Romance languages as an undergrad) and a job waiting for him as a trader on Wall Street.

“I combined the economics, politics, and language skills I acquired through the fellowship while studying abroad, so I’m extremely thankful for the opportunities that Georgia gave me both academically and in terms of learning about the world,” Quinif says.

In June 2019, he started his current job as a vice president at HSBC (which is located on Fifth Avenue not Wall Street, but you get the idea). Because of his language skills, Quinif works as a trader for the Latin American market, but in a general sense, the lessons he learned traveling as a student pay off every day in the increasingly global banking market.

“Knowing how to find a common language, whether it is literally speaking the same language or simply finding common ground, is a very useful thing,” Quinif says. “Knowing what it’s like to be a foreigner somewhere and learning how to adapt to that culture while still being true to your own is a really valuable skill.”

Quinif’s interest in travel crosses over from his profession to his hobbies, too. For instance, a few years ago, on a trip to Patagonia with several other UGA alumni, he was introduced to ice climbing. He fell in love with the sport, and he travels not just to upstate New York but also the Rockies and Alaska to climb everything from glaciers to frozen waterfalls.

“Living in the North, I’ve become a big winter sports fan,” Quinif says. “Something like skiing on ice, though, isn’t fun. But climbing on ice—that’s fun.”