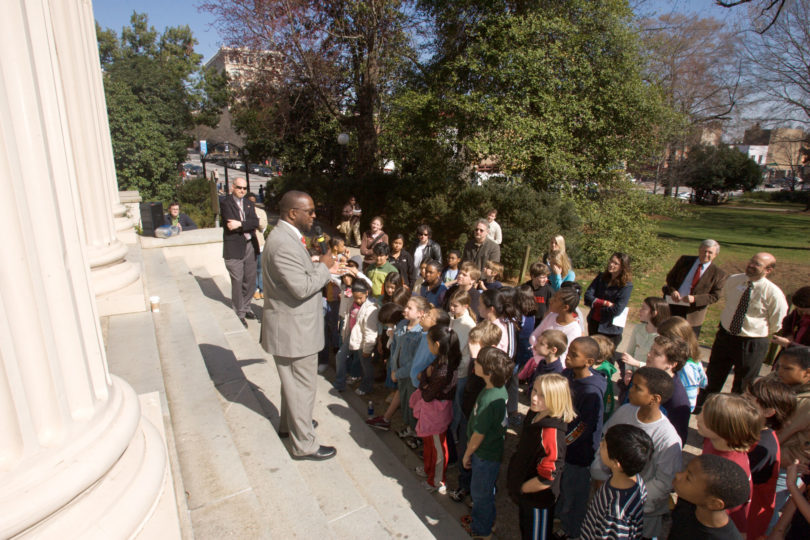 Randy Groomes, director of multicultural programming for the UGA Alumni Association, scanned a sea of 66 fifth graders with their arms stretched upward. A smile on his face, he pointed to a blonde-haired boy at the second table to answer the question, “What are the best colleges?”

“Harvard, Yale and Georgia,” the boy called back.

Maybe it was hero worship or state pride, but the Barrow Elementary students could back up their claims that UGA stands toe-to-toe with Ivy League institutions when it comes to providing opportunities.

They spent three hours earlier this month touring campus, learning about the university’s days as a hotbed of political turmoil, when Charlayne Hunter-Gault and the late Hamilton Holmes became the first African-American students admitted to a large southern college.

The students, two generations removed from the civil rights movement, heard stories about what the university was like during the ’50s and ’60s.

“Have any of you girls been somewhere where you’re surrounded by boys and you’re the only girl?” asked Matt Winston, assistant to President Michael F. Adams. “That’s what it was like for Hunter and Holmes.”

For weeks the students studied African-­American history in Georgia. By the time they reached the Arch, their progress shone. Everywhere they went, the students impressed, sharply answering questions about Justice Thurgood Marshall and naming dates and lawsuits central to the civil rights struggle.

Tossing out names like Martin Luther King Jr. and Rosa Parks was elementary. Articulating Mahatma Gandhi’s role in creating nonviolent protests and naming Donald Hollowell as a leading NAACP attorney were closer to the students’ caliber.

The group watched a video from the Foot Soldier Project for Civil Rights Studies. The project exposes the “unsung” heroes of the movement, unearthing the stories of lesser-known social activists in Georgia. A number of UGA faculty members from five disciplines and the Richard B. Russell Memorial Library are involved.

It was the second time the fifth grade class at Barrow made the trip, according to Bob Boehmer, associate provost for institutional effectiveness.

“This emerged last year out of a conversation between me and (Barrow teacher) Sarah Cross,” he said. “She was describing for me the students were studying Georgia’s civil rights history. And because so much of that history happened literally across the street, right here on campus, it seemed like they should visit. Last year’s visit resulted in a great experience and thrilled responses from school parents. So it returned in 2006.”

The students said they enjoyed the ­experience.

“I probably liked the slideshow at the library best,” said Hunter Wimpey. “I think it was a fun idea and a good thing that there are people doing things like this.”