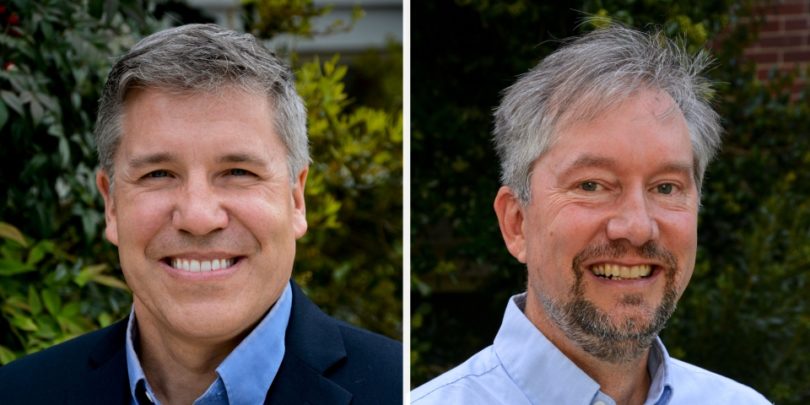 Robert Bringolf and Rhett Jackson stepped into new positions this fall that will help shape undergraduate and graduate education at UGA’s ­Warnell School of Forestry and Natural ­Resources.

Bringolf is now the associate dean for academic affairs, succeeding Steven Castleberry, who has opted to return to teaching and research. Bringolf had been serving as Warnell’s graduate coordinator, a position Jackson has now taken over.

Bringolf said he’s thrilled about his new position at Warnell.

“I’m humbled and grateful to have the opportunity to serve the Warnell School in this role,” Bringolf said. “It’s truly an honor and a blessing to be a part of a community of faculty, staff and students that excel in so many ways.

I look forward to the new challenges and doing whatever I can to maintain and enhance our strong trajectory.”

“The (school’s) graduate program was already running well,” Jackson said. “Administrator Kate Dedufour, and her assistant, Shira Hersonsky, both manage (it) so well.”

“We all deeply appreciate the great job that Dr. Castleberry has done for the school while serving as associate dean for academic affairs,” Greene said.

Bringolf, professor of fish biology and ecotoxicology, has been with Warnell since 2008 and took on the graduate coordinator job in 2015. A prolific author and presenter, he has won numerous honors and awards, ­including the Herrick Superior Teaching Award and the Xi Sigma Pi Professor of the Year Award.