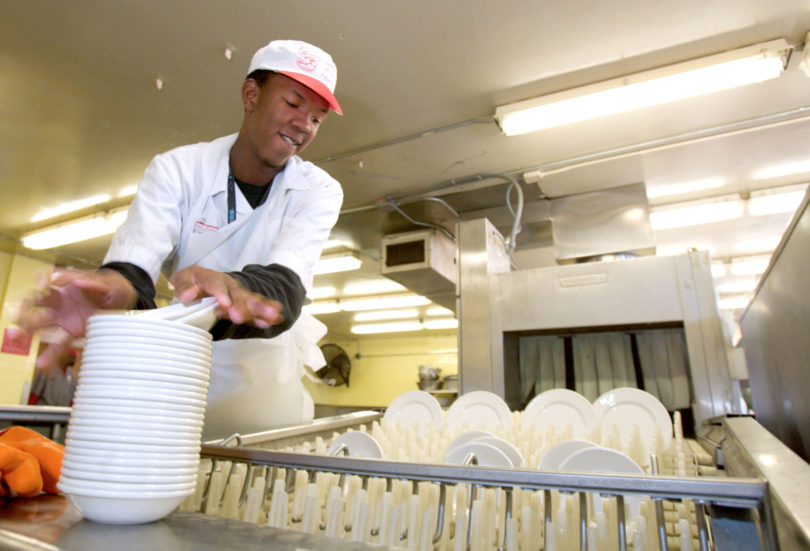 Snelling Hall dishwasher Bryan Ruff was selected last year to become a Sargent Shriver International Global Messenger for the Special Olympics. For the next two years he will travel around the world

JOB DESCRIPTION: “I wash dishes in Snelling Dining Hall, but I do about five jobs-I take out the garbage and recycling, get the glasses and trays, and load and unload the dish machine.”

TYPICAL DAY: “I work the trough, where the dirty trays come in. I load the glasses in the glass rack and put the trays to the side. I get all the plates and silverware ready to go in the dish machine. I load fast, because so many customers are waiting out there, so we have to keep the line moving. We serve 4,000 to 5,000 people every day.”

MOST CHALLENGING PART OF MY JOB: “It’s all about strategy-finding out what needs to be done and doing it right away. I just looked around for the first few days I worked, and then I got my strategy worked out. I serve a lot of people. It’s like me running a 13-mile race back in that kitchen.”

IF I WASN’T DOING THIS JOB, I WOULD MOST LIKE TO: “I work with the Special Olympics, but that only happens at certain times. I might just stay at home and watch some football games. I’m ­really into football, and number one for me is the Georgia Bulldogs. Southern Cal is number two for me. Auburn is good, but I was very sad when Auburn came in and beat Georgia.”

OFF-THE-JOB INTERESTS: “I have been with the Special Olympics for 13 years, since I was 9 years old. Camilla Mims, my kindergarten teacher, told me about Special Olympics when I was a little kid. I’ve done bocce ball, bowling, basketball, long-distance running, tennis and soccer. I did all those sports through the school system and in Special Olympics. I won more than 30 medals-some are gold, some silver, some bronze. The Special Olympics goes year-round, while the regular Olympics are only every four years.

“The Special Olympics has been running for more than 30 years. There are local, area, state and world competitions. The World Games occur every two years with the summer and winter games. This year’s winter games are going to be in February in Nagano, Japan. I get to go as a spokesperson, since I was picked as a Global Messenger. I have never been over there, and I’m excited about going.

“I was in the World Games once, when they were in Dublin, Ireland, in June 2003. I ran the half marathon, which is 13 miles, and my time was one hour, 44 minutes and 56 seconds. That was fifth place. I also won the silver medal in the 3000-meters race-that time was 12 minutes. That was a good trip. It was long, about nine hours, but I really loved it. I had fun on the plane.

“Since I got this job here, and since I became a spokesperson for Special Olympics, I’ve decided to put my running on hold. But now we have an adult league, which started with bocce in October, and it just ended in December. We practiced at the Holland Youth Sports Complex. Bowling starts in January, from 9:30 to 11 o’clock in the morning. We have 12 to 19 people, which is a lot because Hope Haven and a center in Jackson County have joined in to help with the adult league.”

“I was selected as a Global Messenger before I came to this job, back in April 2004. I was heading to class and I looked at my e-mail and they told me I had been selected. I said, ‘Oh, my goodness!’ Cathy Smith, my coach and mentor, and Camilla nominated me to be a Global Messenger. That goes on for two years, until September 2006. Food services is going to work around my schedule so I can travel.”

THE PEOPLE I MOST ADMIRE: “I mostly look up to my family, and the people here. As I walk into Snelling, I feel like most of my family is here.”

THE ISSUE THAT CONCERNS ME MOST ABOUT TODAY’S WORLD: “I wouldn’t change anything about the world-I like it just the way it is.”