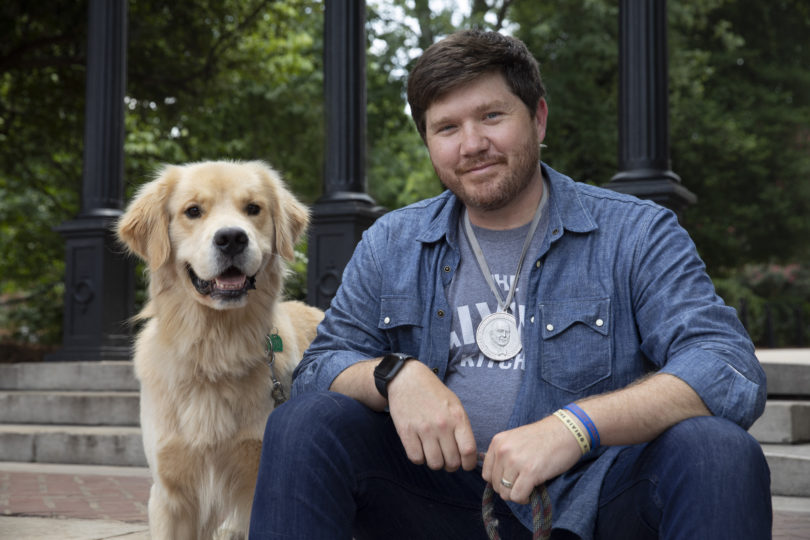 Bryan Schroeder, executive director of the Giving Kitchen and his golden retriever Miles. The Giving Kitchen earned the James Beard Foundation Humanitarian of the Year Award for 2019 through its work providing emergency assistance to food service workers. (Photo by Peter Frey/UGA)

He certainly never thought he’d win a James Beard Award, the Oscar of the culinary world.

He grew up in the deli his parents owned in Rome, Georgia, experiencing firsthand the culture of the industry.

“I got to see what life is like for people in food service—from dishwasher to owner—how great it is and how terrible it can be,” he says. “When I left Rome, I didn’t think I’d ever do anything in restaurants, but here I am. It’s a special kind of homecoming.”

Schroeder MA ’06 serves as executive director for the Giving Kitchen, an Atlanta-based nonprofit organization that provides support to those working in restaurants, catering, concessions, and food trucks. This March, the organization received the James Beard Humanitarian Award, the most coveted trophy in the industry, celebrating an individual or organization focused on giving back to the culinary community.

“Once or twice a week, we’re stopping someone from getting evicted,” Schroeder says. “We’re providing stability to some of the hardest working men and women in our economy and helping keep people off the streets.”

Giving Kitchen also has a stability network, a group of professionals and specialists who provide care free of charge or on a sliding scale to those recommended by the organization. Support ranges from dental needs to child care to mental health counseling.

“We realized these people needed more than a check,” Schroeder says of the network. “We’ve referred more than 1,000 workers to vital community resources.”

The food services industry is one of the largest sources of jobs in the country. Jobs are typically available to anyone regardless of background, education, or criminal history. With the nuances of the industry come struggles such as low pay and irregular hours, things not common in a more traditional working environment. Schroeder understands the struggles well.

“It’s a culture of its own, and we want to make sure that culture is healthy, safe, and stable,” he says. “Part of serving this community is understanding the community. My parents’ restaurant was our one shot. We were helped by so many people in the restaurant community.”

The organization is now reaching outside of the state. At the James Beard Foundation’s award ceremony in Chicago, the Giving Kitchen announced a nationwide effort to provide training and tools for restaurants to create safer working environments. This toolkit will include courses on suicide prevention and building and implementing a sexual harassment policy. Schroeder and his team were thrilled to win the culinary world’s highest honor, but they also hope it brings awareness to their cause.

“The award is great. We will get a lot of positive recognition,” he says. “But people can help us more than any award by telling our story and getting our mission out there to help as many people as possible.”