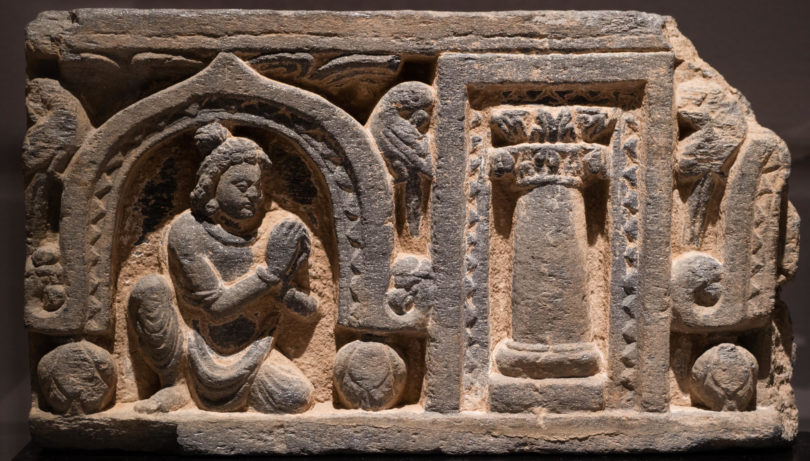 One of the items featured in the exhibition is a kneeling Buddhist lay devotee under an arch, circa second to third century CE from Pakistan, the ancient region of Gandhāra.

Long before the current countries of the Middle East existed, an ancient kingdom known as Gandhāra spanned present-day Afghanistan and Pakistan. Once heralded as the Crossroads of Asia, it fused Greco-Roman aesthetics with Indian forms between 1500 BCE and 535 CE. These cultural traditions and artistic expressions are on view at the Georgia Museum of Art at the University of Georgia through June 17 in the exhibition “Images of Awakening: Buddhist Sculpture from Afghanistan and Pakistan.”

Guest curator Nicolas Morrissey, associate professor of art history at UGA’s Lamar Dodd School of Art, says the exhibition began with a donation to the museum of a rare and important stucco image of a Buddha from Afghanistan that dated to the fifth century. “We wanted to celebrate the acquisition of this image by organizing an exhibition of Buddhist sculpture from the same region and period,” Morrissey said.

Following the conquest of Alexander the Great during the fourth century BCE, the region of Gandhāra became an epicenter of diverse and evolving cultural influences. This fusion of Hellenistic and Roman cultural traditions with the artistic expression and religious worldview of the Indian geographical region created one of the most distinctive groups of ancient and early medieval Buddhist art, a product of these encounters between Eastern and Western worlds. The exhibition features not only the donation that sparked it, but also loans from the Ackland Art Museum at the University of North Carolina at Chapel Hill, the Avery Architectural and Fine Arts Library at Columbia University, the Fralin Museum of Art at the University of Virginia, the Fred Jones Jr. Museum of Art at the University of Oklahoma and the Virginia Museum of Fine Arts.

Morrissey hopes that this exhibition will bring an opportunity for the community to encounter and learn about the distinctive and unique Buddhist cultural heritage of Afghanistan and Pakistan. He explains that it should help shed a light on the true culture of the Middle East. “It is a unique but poorly understood and often misapprehended region of the world,” said Morrissey. “I hope this exhibition will help the community to appreciate the beauty that this culture has to offer.”

“Images of Awakening” is sponsored by the Willson Center for Humanities and Arts, the W. Newton Morris Charitable Foundation and the Friends of the Georgia Museum of Art.