Every year, over a million people develop health care-acquired infections during their hospital stays. And around 100,000 of them die from those complications.

But researchers at the University of Georgia are determined to change that, and their new study shows a promising tool for preventing infections before they happen.

Published in ACS Applied Materials and Interfaces, the study examined how an innovative coating UGA scientists developed can prevent liquids like water and blood from sticking onto surfaces. The researchers also found that the liquid-repellant coating can kill bacteria and halt blood clot formation on an object’s surface.

The challenge of biofilm

Bacterial growth on medical devices is responsible for many hospital-acquired infections. But it’s difficult to combat because bacteria will cling together on an object’s surface, creating a jelly-like coating called biofilm.

“It’s much easier to kill bacteria in its free-floating state, but once it forms a biofilm, it’s very difficult for antibiotics to penetrate the biofilm and kill the bacteria,” said Hitesh Handa, corresponding author of the study and associate professor in UGA’s College of Engineering. “Part of the biofilm can break off and infect other places in the body, and it becomes very difficult to treat when the infection spreads.” 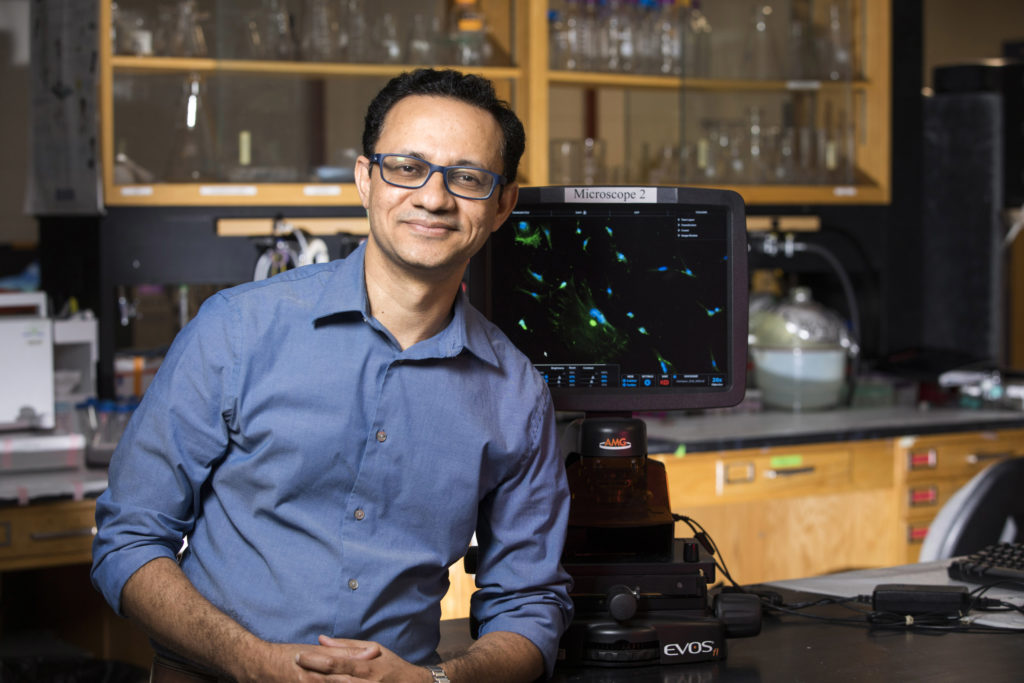 Hitesh Handa in his lab. (Photo by Dorothy Kozlowski)

The researchers combined zinc oxide and copper nanoparticles with a liquid-repellant coating. To test how effective their coating was against liquids, they applied the coating to sponges.

“Sponges are so absorbent,” Handa explained. “If it would prevent a sponge from absorbing any liquid, then of course it will also work very nicely on medical device surfaces.”

The team tried applying water, milk, coffee, juice and blood to the sponges, but the liquids slid right off. The researchers also found that the bacteria they tried adhering to the sponges, Staphylococcus aureus, likewise didn’t stick on the surfaces. Additionally, the coating repelled the majority of the particles in blood that lead to clotting.

Previous research has developed similar superhydrophobic coatings, but they had serious limitations.

“These coatings are typically very fragile,” said Ekrem Ozkan, lead author of the study and a postdoctoral researcher at UGA. “They can easily lose their superhydrophobic properties after minor damage—even just a finger touching the object.”

The team put this new coating through multiple rigorous tests, subjecting sponges to everything from wiping fingers across their surfaces to using sandpaper on them to peeling tape off them. Despite the abuse, the sponges maintained their superhydrophobic qualities.

Because of its durability, there are many potential applications for the coating, ranging from bandages to IVs and endotracheal tubes. The researchers are also examining how they can introduce a nitric oxide component into the coatings. Handa’s lab focuses on the technology that uses the powerful gas found naturally in the body to keep blood flowing and stave off infection. Nitric oxide can also prevent bacteria from multiplying on the devices and causing disease.