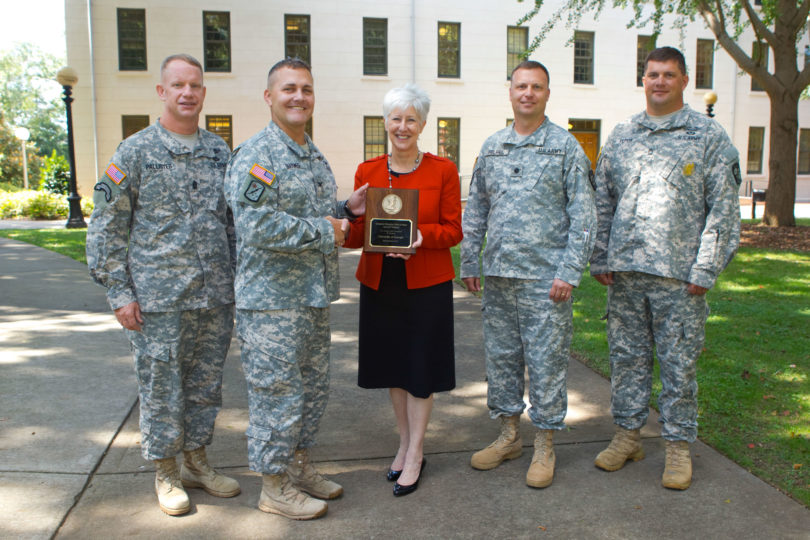 UGA’s Army Reserve Officers Training Corps was presented with the official plaque for the 2012 MacArthur Award announced earlier this year.

A unit of the Office of the Vice President for Instruction, UGA’s Army ROTC won one of eight MacArthur Awards from the U.S. Army Cadet Command. UGA is the only school out of 39 senior Army ROTC programs in the Sixth Brigade in the Southeastern U.S. and Puerto Rico to receive the MacArthur Award for the 2011-2012 school year.

Presented on behalf of the Gen. Douglas MacArthur Foundation, the award recognizes the ideals of, “duty, honor and country” as advocated by MacArthur, and is based on a combination of the achievement of the school’s commissioning mission, cadets’ performance and standing on the command’s national Order of Merit List and cadet retention rate.

“I am certainly honored and humbled that UGA’s Army ROTC program has been selected as one of the eight best out of more than 270 ROTC programs from across the nation,” said Felpel, commander of the Bulldog Battalion and an adjunct professor of military science. “I am proud of the cadets and how well they perform in the classroom, in leadership roles and when compared to other cadets from across the country. This award means that we are a program headed in the right direction and all the hard work put in by the cadre and cadets has been recognized at a national level.”

Cadet Command and the MacArthur Foundation have given the awards annually since 1989.

The plaque is on display in the UGA Army ROTC office.