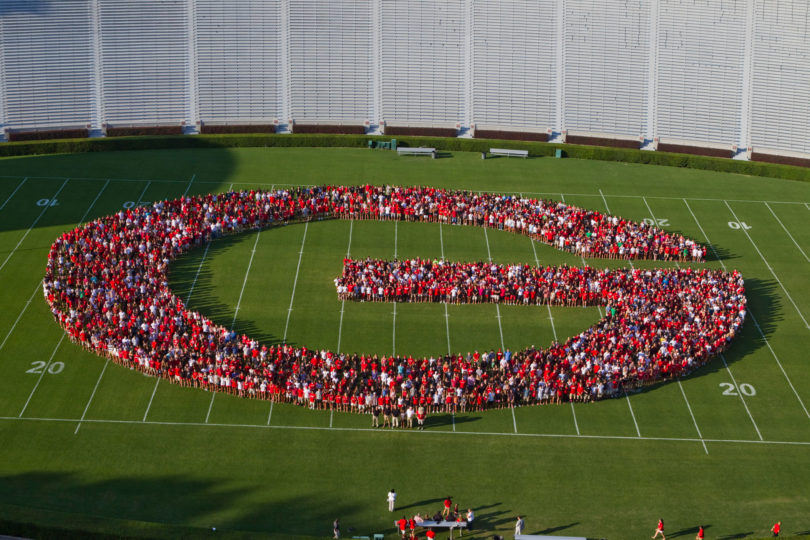 As part of Freshman Welcome

A day before fall semester classes began, this year’s crop of first-year students got their first course in Bulldog traditions.

Thousands of students—fresh from moving into their residence hall rooms—gathered Aug. 12 in Sanford Stadium for the Class of 2016 Freshman Welcome. The event aimed to teach students how to cheer at UGA football games and gave those students a chance to take to the field. It also emphasized the importance of their class work.

With the aid of the Redcoat Band, Whitmire introduced the new students to football chants and gestures like the four-fingered fourth-quarter salute.

The throng of young students, most of whom were dressed in red and black for the event, enthusiastically followed along in the drills.

Jonathan Terry, a first-year student from Macon, already knew most of the cheers by heart. Growing up a Bulldog fan and having two brothers attend UGA, Terry said he’d already been to his share of football games.

For Christina Wilson, who came to UGA from Roswell, the football traditions were still new.

Wilson carefully participated in cheers with the rest of the crowd, but admitted afterward the traditions probably won’t sink in until after she has a few games under her belt.

Despite the athletic setting and emphasis on football, the underlying message at the event was to encourage students to work hard in the classroom and to make the best of the myriad of opportunities available on campus.

“Your strongest accomplishments will occur in the classroom,” Whitmire told the students over the P.A. system.

The president went further in challenging the students to live up to their impressive high-school GPA and SAT scores.

He went on to encourage students to look for activities beyond sports as well.

“As great as Sanford Stadium is, as great as the sports program is at UGA, get out to some other places as well. Go to one of the nation’s top college museums of art. Go to one of the nation’s best botanical gardens,” Adams said. “Be involved in whatever level of ski club, hiking club or travel club or whatever appeals to you. Get involved. You’ll make relationships and friends who will be friends for life. You, like my family, will become Bulldogs for life.”