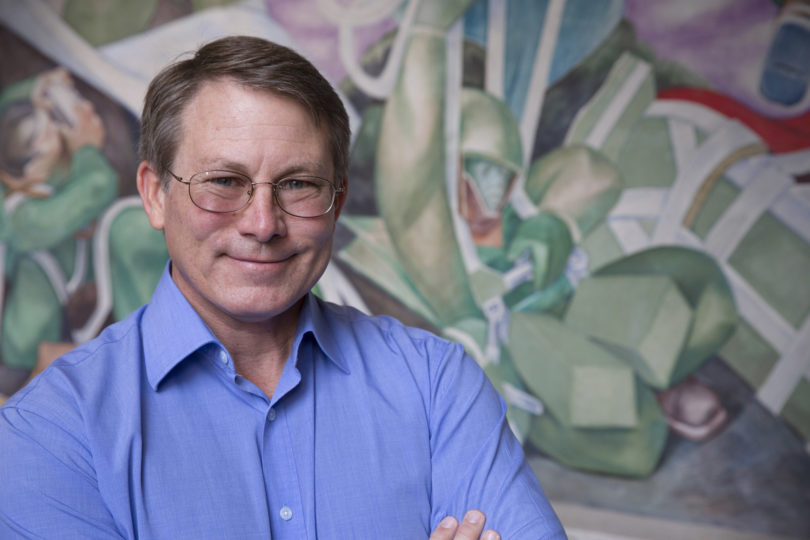 As the director of the Master of Internet Technology program and the first certified online instructor in the Terry College of Business, Craig Piercy is no stranger to teaching students he’s never met.

In fact, conveying a personal touch through a computer screen is a specialty of his.

“One of the things you can’t get naturally online is the teacher-student connection,” Piercy said. “You lose that presence when you don’t see people face to face.”

Piercy finds ways to remind students that there is a human being behind the instructional videos they watch. He tries to allow students to get to know him.

“I always include a little bit of myself, maybe telling some corny jokes and introducing the concept,” he said.

Teaching that transcends time and location is important for Piercy because the MIT program, which prepares working adults for careers at the intersection of business and technology, transitioned to a completely online program in fall 2014.

“There are two kinds of students that we typically see in this program,” Piercy said. “They are people who either want to enhance their careers with a master’s degree or switch their careers and move to a new field.”

Piercy gave the example of a high school math teacher who wanted to switch careers, and now she’s a tech consultant for Web development.

While the MIT program is open to students across the state and the nation for the same price, it can be funded partially for UGA employees through the Tuition Assistance Program.

The MIT program’s move to an online-only format, Piercy said, is not only a chance to better serve graduate students, but the teaching lessons learned by the program instructors also can impact the more traditional classes on the UGA campus. This is particularly true for classes that are delivered using the “flipped classroom” model of education.

“The whole idea for the flipped classroom is that instead of going into class and lecturing, being a ‘sage on the stage,’ we move a lot of our curriculum to a learning platform, like e-Learning Commons, and when students come to class we give them practical activities to work on,” Piercy said. “So the teacher becomes more of a ‘guide on the side.’ The learning modules that we create for our online classes can easily be used with our on-campus flipped classes when appropriate.”

MIT students spend five semesters taking online courses at their own pace, culminating in a capstone group project. Courses are divided into modules that students can complete in a week, with quizzes and assignments built in.

Most weeks, Piercy’s classes don’t include any “live” classroom time. On other weeks, Piercy holds live sessions where he interacts with students through the Internet. Those classes aren’t required. They’re posted online later for students who cannot attend. But attendance is encouraged.

Piercy came to his position almost by accident. He started as an electrical engineer with Milliken. And, after a few years on the job, he started to think about MBA programs. He took the GMAT and applied to a few places, but had planned to put off graduate school. That is until a phone call from a Terry College administrator, Don Perry, changed his mind-and eventually his life.

He accepted a scholarship to Terry College and found not only did he excel at learning the material, but he also enjoyed explaining it to others.
“Back in my MBA days was when I really discovered I liked teaching,” he said.

Piercy was a teaching assistant. But in his own classes, especially the more quantitative ones, Piercy became a popular “study buddy” with classmates.

“When you’re a study buddy, you’re really just teaching your friends,” he said. “So I realized that I had a knack for taking these difficult quantitative concepts and breaking them down into an understandable level.

“The other thing I realized is that once you teach something, then you really know it,” he said. “First you read about something and try to understand it, but if you really want to know if you know something well, try to teach it someone. That’s how you really learn.”