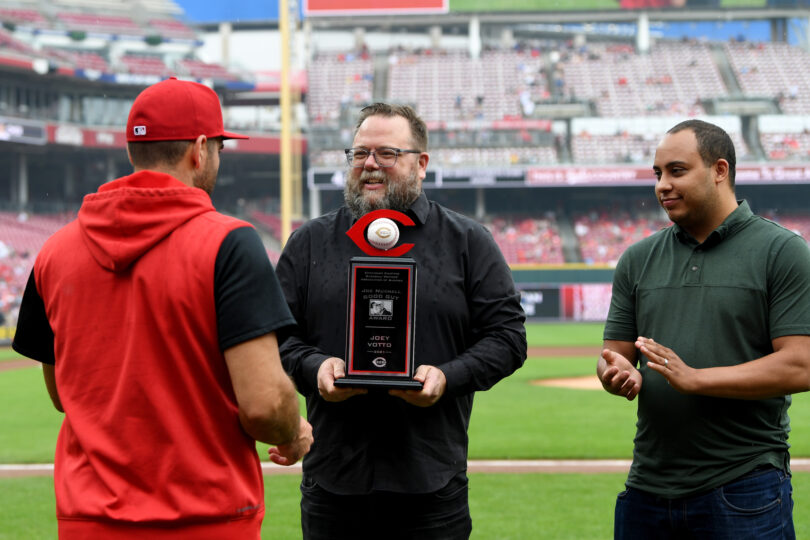 C. Trent Rosecrans (center) served as the 2021 president of the Baseball Writers Association of America.

C. Trent Rosecrans has worked his way up the sports writing ladder, reaching the top when he became president of the Baseball Writers Association of America

The Moleskine notebook C. Trent Rosecrans keeps on the bookshelf of his home office in Cincinnati has a lot of mileage. It’s within arm’s reach of his computer at all times.

The notes, numbers, and observations he scribbles in it date back to 2015, the first year he voted for the National Baseball Hall of Fame.

That was a big year.

Randy Johnson and Pedro Martinez were elected in their first year of eligibility—and the statistical case for their election is right there in those well-worn pages.

Rosecrans ABJ ’98 has nearly 25 years of experience as a sports journalist, and he has covered the Cincinnati Reds since 2007 for a variety of publications, including The Athletic, the online sports site he joined in January 2018.

In 2021, he reached a pinnacle of his profession, serving as president of the Baseball Writers Association of America (BBWAA), the 700-plus member body that votes for the Hall of Fame every year. As past-president, he remains on its board this year.

With a 162-game regular season, plus Spring Training and post-season games, the baseball beat is generally viewed as sportswriting’s most strenuous gig, and Rosecrans is not alone in relishing the challenge.

“You can always tell aviators by the way they walk,” says Rosecrans, who grew up on military bases around the world. His father was a nurse in the U.S. Navy. Rosecrans says the same is true for how baseball writers talk, developing a lingo that sets them apart from—and in their opinion above—other sportswriters.

“We are so egoistical that we call ourselves ‘ball writers,’ as if none of the other sports have balls,” he says.

As a UGA journalism student, Rosecrans joined the staff of The Red & Black, which was putting together a veritable mid-90s All-Star team of its own.

He was encouraged to join the paper by Carrie Gibson ABJ ’98 (a critically acclaimed author). And his first sports editor was Mark Schlabach ABJ ’96, who wrote college sports at The Atlanta Journal-Constitution before becoming one of ESPN’s most well-known NCAA reporters.

Rosecrans’ work was noticed off campus. During his senior year, the Athens Banner-Herald hired him part-time, and he stayed on full time after graduation until 2003.

Rosecrans joined the staff of the Cincinnati Post in 2004. In 2007, he finally got the baseball beat he coveted. After the Post folded, he bounced around the Cincinnati media landscape a few years before he took over the Reds beat for the Cincinnati Enquirer in 2013. He kept the beat when he moved to The Athletic.

Rosecrans’ role with the Post started his clock for the BBWAA, which requires 10 years of experience for membership. With his 2014 acceptance came the honor—and responsibility—of filling out a Hall of Fame ballot.

That’s when he got the notebook.

In addition to keeping copious notes on Hall-eligible players, when voting time rolls around, Rosecrans talks to players, executives, managers, scouts, and other writers discussing the merits of each player. These types of conversations are not new.

“I remember having those debates with my dad as a kid. At the time, he was the expert. Mickey Mantle was his favorite player. Then I was the expert. He passed away in February,” Rosecrans says, pausing slightly.

“Even when he was having trouble talking, we still talked about my Hall of Fame ballot. He’d always ask, ‘Why? Why did you vote for this guy and not that guy?’ It was never a judgment. It was really just a question to see how someone else is thinking.”

That perspective about transparency is why Rosecrans releases his Hall of Fame ballot for public view. (It’s not required.) While other writers refuse to discuss their choices, Rosecrans freely discusses his on podcasts, in columns for The Athletic, and in other forums.